In what follows I am mostly summarising Auden’s own discussion of Frost, written in the late 1940s. But I am adding thoughts of my own as well (in the light of teaching Frost) and it would be prudent to make sure you have read Auden’s essay alongside this post. 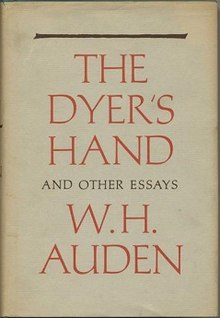 Auden’s essay, ‘Robert Frost’, can be found in The Dyer’s Hand (Faber, 1963) and it starts with a distinction between what a poem says and what the poet says. Keats’ ‘Ode on a Grecian Urn’ ends with the statement that “Beauty is truth, truth beauty”. This is clearly the urn speaking and voicing a predilection for the kind of art “from which the evils and problems of this life”, argues Auden, have been “deliberately excluded” (p. 337). The Urn is such a piece of art, defining its own beauty in the act of excluding the “heart high-sorrowful and cloy’d” (alluded to in its own third stanza). Yet Keats’ main narrative voice does not subscribe to such a view and the possibilities of these ironic distances between poet, narrative speaker and dramatic characters (even if only an old urn) are things we should take into any reading of Robert Frost.

But Frost is not an Urn Poet, seeking beauty at all costs; Auden links such a desire with the figure of Shakespeare’s Ariel.  The Ariel poet wants a poem to be “a verbal earthly paradise, a timeless world of pure play” which gives the reader delight in so far as it contrasts with our true existence in history, with our “insoluble problems and inescapable suffering” (p. 338). Taking an unprepossessing extract from George Peele, Auden characterises the Ariel poem as tending towards anonymous generalities, a verbal contraption such that, if we try to explain what pleasure it gives us, “one finds oneself talking about language, the handling of the rhythm, the pattern of vowels and consonants, the placing of caesuras etc”. Ariel has no passions – his earthly paradise is beautiful but not very earthly in truth, and nothing of consequence can happen there. An anthology edited by Ariel runs the risk of delivering mere narrowness and a monotony (or even absence) of feeling. Auden refers us to Virgil’s Eclogues, and poets like Campion, Herrick and Mallarme (I’d add other assorted Surrealists, Dylan Thomas, John Ashbery). In being turned away from historical reality, there is inevitably a narcissistic quality to Ariel poems (p. 340). Damning with faint praise, Auden notes Ariel’s worst fault is a minor one, a self-regarding triviality.

In contrast, Frost is a Prospero Poet. To explain, Auden quotes Dr Johnson: “The only end of writing is to enable the readers better to enjoy life or better to endure it”. The Prospero poem should provide us with “some kind of revelation about our life”; it will act so as to “free us from self-enchantment and deception” (p. 338). In order to do this, the Prospero poet must introduce into the poem “the problematic, the painful, the disorderly, the ugly”, in other words Keats’ “heart high-sorrowful and cloy’d”. Frost’s poems are recognisably of this type and they seem to derive from “an experience which preceded any words and without which the poem could not have come into being”. Rather than Ariel’s narrow focus on the beauty of the constituent verbal elements, these are now regarded as “subordinate in importance to the truth of what [the poem] says” (p. 340). Auden nominates Wordsworth as the English poet who, more than any other, has the least element of Ariel, a preponderance of Prospero. Wordsworth’s earthiness, directness of address and simplicity of language can reach peculiar, bathetic  extremes, as in ‘The Thorn:

This thorn you on your left espy;

And to the left, three yards beyond,

You see a little muddy pond

I’ve measured it from side to side:

Yet, of ‘Mending Wall, Frost has said that he “dropped to an everyday level of diction that even Wordsworth kept above”. In Frost’s poem there are only two words with more than two syllables. This is evidence of Frost’s Prospero-like quality as Auden defines it. But the risk of such simplicity and directness – lodging any validity it possesses in the poem’s relation to truth – is that, in failing, the poet offends not merely against triviality but against truth itself. The poem may be false and a reader might conclude, “This poem should not have been written” (p. 341). 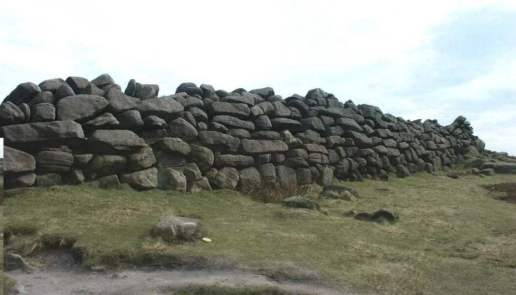 Auden is, of course, dealing with extremes here and he admits most poetry presents a blend or tension of Ariel and Prospero qualities. But, considering a poet’s output, it is possible (and useful) to say that he or she is dominated by one or the other. So Auden describes Frost’s Prospero-like language: “The music is always that of the speaking voice, quiet and sensible . . . he rarely employs metaphors . .  yet he manages to make this simple kind of speech express a wide variety of emotion and experience” (p. 342). This achievement is because Frost’s diction is that “of a mature mind, fully awake, and in control of itself; it is not the speech of dream or of uncontrollable passion”.  The reader will often be aware of strong, even violent, emotions lying behind what is actually said, but the saying “is reticent, the poetry has, as it were, an auditory chastity”. So Frost’s poems are quiet on the surface which readers find inviting or, if more superficially read, boring. But the drama is real enough and, once entered into, not uncommonly, in Lionel Trilling’s famous observation, potentially “terrifying”.

Auden goes on to make observations about some of Frost’s themes. ‘Two Look at Two’ is a “miraculous exception” in Frost’s general presentation of man’s relationship with Nature since the couple observing the buck and the doe seem to be rewarded with a sympathetic response. It is “As if the earth in one unlooked-for favour / Had made them certain earth returned their love”. In fact, this conclusion may seem less exceptional if we pay attention to the “As if” and – just as in Keats’ Urn – find a difference between the poet’s intention and the Ariel-like urge towards an ideal or paradisal ending to the poem (the couple’s love is returned only in their own rosy-tinted perception). More typically, Frost’s Nature is better represented by the “great buck” of ‘The Most of It’ which emerges from a lake, alien and indifferent to the human desire for “counter-love”.

This sense of cosmic indifference to the human draws from Frost his often expressed admiration of stoic courage, the ability to keep on keeping on. This, Auden points out, is the significance of Frost’s frequently deserted dwellings. In Europe, such an image might suggest “injustice and greed and the nemesis that overtakes human pride”. But in Frost, such ruins are rather “an image of human heroism, of a defence in the narrow pass against hopeless odds” (p. 345). Auden’s point is that Frost’s poetry looks forwards rather than backwards, nostalgia is not a common note; more usual, and more distinctively American, is “the ever-recurrent opportunity of the present moment to make a discovery or a new start” (p. 349). This is why Frost lauds work and labour so much. His highest virtue is the self-respect that comes from taking pride in something achieved.

Baptiste – the French-Canadian axe-maker in ‘The Axe-Helve – is such a man and also a Prospero-like artist:

He showed me that the lines of a good helve

Were native to the grain before the knife

Expressed them, and its curves were no false curves

An Ariel axe-helve would look beautiful – but be wholly useless for the task. Frost said: “Art should follow the lines in nature [. . .] False art puts curves on things that haven’t any curves”. Unreliably narrated by a stiffly condescending New England Yankee farmer, the poem in fact favours Baptiste’s pragmatic art (which is Frost’s too). The same effect is heard in ‘Mending Wall’ in which the arrogant, mischievous narrative voice makes no headway against his less educated neighbour’s refrain: “Good fences make good neighbours”.

The narrator of ‘The Wood Pile’ is similarly undermined by his own poem. There is an Ariel-like restlessness about him. His curiosity has an aimless, insatiable quality as if the mixed nature of what lies before him is not enough. Having decided to return home, he changes his mind: “No, I will go farther – and we shall see”. What he eventually finds is an image reflective of his own failing: a wood pile, carefully and laboriously constructed and then abandoned in a restless search for novelty. Seemingly un-selfaware, he criticises the man who “lived in turning to fresh tasks” and could “so forget his handiwork”.

It’s in ‘Birches’ that Frost most clearly engages with the contrasting desires of Ariel and Prospero. Climbing the tree “Toward heaven” is Ariel’s desire to “get away from earth a while”. This is contrasted to the earlier passage in the poem in which “Truth” breaks into the narrative, describing the irreversible damaged an ice storm can do to a birch tree: “they never right themselves”. It is Frost’s choice to take a third way, to be “a swinger of birches”, achieving a balance or sequence of both heavenward and earthward motion. If this sounds like an equal balance, it is misleading since –  as Auden argued – the scale is unmistakably tipped in Frost’s case towards Prospero. I don’t sense any irony in the declaration of ‘Birches’: “Earth’s the right place for love: / I don’t know where it’s likely to go better”.