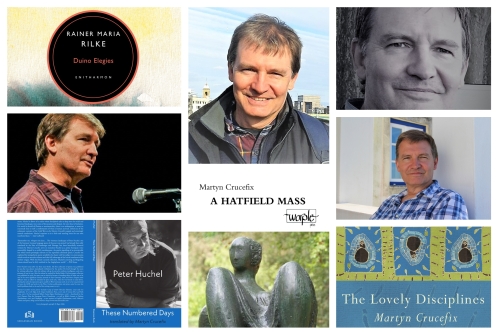 Martyn’s most recent publications are:

Cargo of Limbs (Hercules Editions, 2019): poems by Martyn Crucefix; images by Amel el Zakout; essay by Choman Hardi. Blurb: Martyn Crucefix’s Cargo of Limbs is a “brilliant revision” (Choman Hardi) of lines from Book Six of Virgil’s Aeneid. Two Western journalists document in their different ways the ordeal of migrants in search of safety in Europe. The tone and narrative – as in the original – is dream-like and nightmarish. As they reach the shoreline, this is not the River Styx but the Mediterranean and the ferryman’s boats – “the black dinghy squeals / the leaking boat groans” – promise danger more than escape. “Martyn Crucefix knows in his bones that “what / happens is what’s true” and his liquid, propulsive poem records, like the accompanying photographs by Syrian artist Amel el Zakout, the horrible adventure of survival. Cargo of Limbs sees or struggles to see; it is a lament and a rebuke, a concise saga of our savage time” – Dan O’Brien

These Numbered Days, poems by Peter Huchel, tr. Martyn Crucefix (Shearsman Books, 2019). Blurb: Joseph Brodsky hailed Peter Huchel as one of the finest poets of the last century, possessed of “the severest and most elegiac voice in German poetry”. Contemporaries in the German Democratic Republic referred to him as ‘the secret king’ and, in Iain Galbraith’s view, “lifted out of the schismatic currents of the Cold War era by Martyn Crucefix’s supple and arrestingly sensual translations, Huchel surprises us as a fresh and startling voice for our own numbered days”.

The calm of the stream,

the fire of the earth,

are my dangerous neighbours.

“These beautifully nuanced new versions by Martyn Crucefix serve to reawaken Huchel as a prime European poetic voice mournfully shaped by a swiftly receding past, the signalling of an irretrievable loss which seems pressingly relevant to our supremely alienated epoch . . . With this finely curated collection, Huchel’s arresting and beguiling visions should now be fully credited in the Anglophone world” – Will Stone.

Martyn Crucefix’s sixth full collection of original poems was The Lovely Disciplines, published by Seren Books in 2017. Also in 2017, Guillemot Press published, O. at the Edge of the Gorge, a new sequence of 14 linked sonnets and Sam Riviere’s If a Leaf Falls Press published Martyn’s short abecedary sequence,  A Convoy. Martyn’s last translation project was Daodejing – a new version in English – for more details on this book click here.

He has won numerous prizes including a major Eric Gregory award and a Hawthornden Fellowship. He has published 7 collections of poetry including Hurt (Enitharmon, 2010): “an exceptional ear . . . superbly intelligent . . . urgent, heartfelt, controlled and masterful.” (Kathryn Maris, Poetry London): for more information click here. 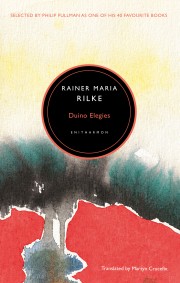 For a recent major interview with Martyn covering topics such as getting into poetry, traditional prosody, a discussion of narrative and confessional poetry, the processes of translation and work in development: click here. To read another, earlier interview go to: Wales Arts Review.

One thought on “Biographical Details”