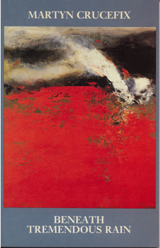 Published by Enitharmon Press in 1990: for more information click here.

Recently Reviewed by Anthony Wilson here. . . . If you do not know the book, you are in for a treat. Every poem in it is a gem, properly crafted and deeply felt. In particular I loved his poems about the natural world (‘Blackcurrant Wine’, ‘Apples’, ‘Drowned Shelley’ and ‘Marrow’) and art (‘To the Painter, 1603′,’Water Music’,’ George and the Dragon’). Most impressive of all is how he uses what Don Paterson calls ‘the pretext of subject matter’ to talk about what is really on his mind, ‘coercive dreams’ (‘Water Music’) in philosophical dialogue with ‘celebratory hunger’ (‘In Memory of Jeremy Round’) throughout.

‘Sugar in Banana Sandwiches’ is a great example of this. It fulfils my basic requirements of a poem, to take me somewhere and end far from where it began, preferably enacting the ideas ideas it engages with as it goes. The poem’s phrasing embody what athletes call muscle memory, arriving at its thinking for me, perfectly fusing idea and action in ‘melting crunch’, ‘pliable cool mass of flesh’ and those ‘gutters threatening with blown rain’. ‘I push a steering wheel with a careful/ right hand like holding a pen − like Dad’ is exquisite, the unfamiliar verb of ‘push’ blossoming into that extraordinary analogy of driving and writing. Rhythmically it is perfect, too, ‘like holding a pen − like Dad’ ensures the image does not out-stay its welcome, linking it to the particular and to memory, neither of which can be argued with.

Poem after poem in Beneath Tremendous Rain achieves this effortless-looking blending of feeling and thought. If you don’t know it, you are in for a treat.

“Martyn Crucefix has a distinctive voice. BTR has considerable range of form, subject and style and emotional pitch. Crucefix is at his best writing sparsely with cryptic detachment. The poet employs distinct personae to great effect. Richly enjoyable . . . He is strongest with people and their emotions, particularly when he writes about the interruption of lives by faceless cataclysm”. Tim Gooderham  TLS

“Great intelligence and subtlety . . . clearly an outstanding talent from whom great things can be expected”  Herbert Lomas, Ambit

“Salvation and torment . . . the world of sensuality, bad moods, jealousies, grief, and ‘the crumbling glint of waves’ that offers ‘the unbounded horizon’ only in death, soaks this volume. Crucefix’s range is broad, but its tessitura has the seriousness of confession, saved from indulgence by his crisp handling of the music”  Adam Thorpe, The Observer

“Poetry these days, often feels obliged to place conscience over art and make language work for precision, not complexity. In Martyn Crucefix’s first collection, something else happens . . . daring to break with secular convention, Crucefix will become a real artist”. Anne Stevenson, Stand

Disarming honesty; a refreshing seriousness; a remarkable range of form and tone – these are the striking characteristics of Martyn Crucefix’s poetry. His first collection, Beneath Tremendous Rain reveals a willingness to tackle major issues with a directness and sensitivity that is matched by his forthright treatment of personal relationships. Crucefix rages at man’s destructive stupidities, casts a cold eye on our desire and self-deception, yet he can still persuade the reader of the necessity to ‘maintain hope which is essential.’

In Memory of Jeremy Round

You lived a strange short life.

Breezed so quickly through mine

it’s only now I see how deep

you touched, a taste of something

tartly clean. You moved on, grew

famous for daring to smoke

monkfish fillets in a wok

over a fortune-telling of tea.

for the clarity with which you

explained how to separate a mango

from its skin and stone.

All the culinary prizes tumbled

to you as quickly as the doors

of London opened – as quickly

Whoever saw you suffer long

unbuttoned I remember you,

though we never dined al fresco

near Antioch, nor tossed back

them down with a glass of bubbles.

All my puritanical doubts –

shocked at the world in whose sky

you were the fastest rising star –

they were blown so cleanly away

by your sheer celebratory hunger.

Everybody remembers you smiling.

Serious in the obituary snap

from six years back, I’d forgotten

what a sexy mouth you had.

You were that rare thing, a good man –

though not to the bishop’s liking.

You said: happiness will be caviar

and unpasteurised brie in heaven.

and breathed-air froze hard in our nostrils,

we met in Oxford with the other hopeful scribes,

behind leaded windows in the Old Fire Station.

All that bitter winter you buttoned and belted

a heavy gaberdine so tightly round your middle,

spreading already . . . Even trussed up, your

You were good for us – heady and deadly serious

as we were, you persuaded that poetry’s sister

arts were food and sex. We all studied hard.

I remember you praised my poems but always had

between the beers and crossfire from Tom,

poems from his tackle bag like fish; from Helen,

than most of us could muster; from Peter’s

exactitude, schooled on a diet of science, he held

each piece like a prism till it shed eloquent

rainbows; from Bill and Keith, the ferocious

tyros, the university wits, who minced nothing

but their language into strange sweet things;

from Paul whose poems were amazed not to find

themselves loosed into a more graceful age

than the one we live in. God! We were going to take

the poetry world by storm! We’d put it to rights,

marching on a diet of your invention. Jeremy, you

earned the right to imagine us, desk-bound now,

back in the old ways, chewing on unproductive pens

dark-browed and anxious for a fitting elegy.

I called at your house in Osney,

the place where Chaucer’s Alison

and had her arse kissed.

You were preparing a chicken

and as you talked

a surgeon’s hand wielded a razor-knife

and flew so quickly

over the creamy, pimpled skin

that it offered itself up, seemed to open

for the garlic cloves

you pushed gently into each

and patted shut with a slap.

how you enjoyed my poems

yet you wanted them always

to gird themselves more,

to snatch up a swig of the wicked

Why must the good go under the ground?

I mean those who are as full of life

as my friend, portly Jeremy Round.

He wielded a pen as sharp as his knife.

He loved the world, craved its taste –

so he put it on around the waist.

Salmon, wine and the rankest cheese,

he killed himself trying to squeeze

everything in. He made himself a rack

of pleasure, eager to blow the spark

of life before it all went dark.

I sit here and still catch my breath

because I remember him so well.

His every action said: screw death!

Get the best you can or go to hell!

Days should be funny, sexy, intense –

I know he would never accept the part,

but I’m sure he’ll relish the cheek

if I write him with an honest heart.

Laughter, love, the senses are profound.