Raymond Antrobus – The Perseverance (Penned in the Margins) – reviewed here.

Jay Bernard’s Surge is a slim volume carrying with it a great deal of political as well as publishing history. Its early stirrings seem to have been Bernard’s residency at the George Padmore Institute in north London where they explored documents relating to the New Cross Fire in January 1981. Often dubbed the ‘New Cross Massacre’, thirteen young people died in a fire at a birthday party. The fire may have been racially motivated arson and certainly the authorities’ response to the incident was unconvincing, possibly obstructive. There is a direct line from this incident, through the imposition of SUS laws and ‘stop and search’ in South London and the SWAMP 81 police crackdown and the subsequent, so-called Brixton Riots of April 1981. The Scarman Report in November of that year laid the blame for the riots squarely on the police action. In our contemporary landscape, and especially after the Grenfell Tower fire and the still-unresolved shameful treatment of the Windrush Generation, it’s easy to see why Bernard wanted to write about New Cross.

But Surge itself has since gone through various forms. There were 10 original poems written quickly in 2016. There was a performance piece (at London’s Roundhouse) in the summer of 2017 (it was this version that won the Ted Hughes Award for New Work in poetry in 2017). But it has taken 3 years for this Chatto book to be finalised. In an interview just last year, Bernard observed that they were still unclear what the “final structure” of the material would be. I’m possessed of no insider knowledge on this, but it looks as if this “final” version took some considerable effort – reading it makes me conscious of the strait-jacket that a conventional slim volume of poetry imposes – and I’m not sure the finalised 50-odd pages of the collection really act as the best foil for what are, without doubt, a series of stunningly powerful poems. The blurb and publicity present the book (as publishers so often do) as wholly focused on the New Cross and Grenfell fires but this isn’t really true and something is lost in including the more miscellaneous pieces, particularly towards the end of the book.

Bernard writes of events in the past by deploying a multiplicity of voices which are given the power to haunt backwards and forwards through historical time. Unusually, their own voice is heard in ‘Ark’. They are here searching through an archive of documents of “flaking Letraset and amber glue” that also (punningly) acts as an ‘ark’ to bring the dead back to the present. What preoccupies the narrator is how and where to “file / the damp smoke and young bones” of the New Cross victims. The conclusion seems to be they cannot be securely and finally located anywhere while the country still experiences “the burning house, the child made ash, the brick in the back / of the neck, the shit in the letter box and piss up the side of it”.

Bernard’s poetic voice is at its best when making full use of the licence of free forms, broken grammar, infrequent punctuation, the colloquial voice and often incantatory patois. So a voice in ‘Harbour’ wanders across the page, hesitantly, uncertainly, till images of heat, choking and breaking glass make it clear this is someone caught in the New Cross Fire. Another voice in ‘Clearing’ watches, in the aftermath of the blaze, as an officer collect body parts (including the voice’s own body): “from the bag I watch his face turn away”. The cryptically titled ‘+’ and ‘–’ shift to broken, dialogic prose as a father is asked to identify his dead son through the clothes he was wearing. Then the son’s voice cries out for and watches his father come to the morgue to identify his body. This skilful voice throwing is a vivid way of portraying a variety of individuals and their grief. ‘Kitchen’ offers a calmer voice re-visiting her mother’s house, the details and familiarity evoking simple things that have been lost in the death of the child:

I have held this house

in my arms and let it sob

on the bathroom floor, heard it in

the background of a call,

heard it speak a kind of love –

A vigorously rhythmic patois voice is used in ‘Songbook’, recycling the horrific narrative again as a young boy and girl dance happily until:

Gyal fall back inside an we no see her no more

Bernard acknowledges their debt here to Linton Kwesi Johnson’s earlier poem about the New Cross Fire; you must listen to Bernard give a mesmerising performance of their own great poem here.

I’m guessing most of the poems I have referred to so far come from the early work of 2016. Other really strong pieces focus on events after the Fire itself. ‘Duppy’ is a sustained description – information slowly drip-fed – of a funeral or memorial meeting and it again becomes clear that the narrative voice is one of the dead: “No-one will tell me      what happened to my body”. The title of the poem is a Jamaican word of African origin meaning spirit or ghost. ‘Stone’ is perhaps a rare recurrence of the author’s more autobiographical voice and in its scattered form and absence of punctuation reveals a tactful and beautiful lyrical gift as the narrator visits Fordham Park to sit beside the New Cross Fire’s memorial stone. ‘Songbook II’ is another chanted, hypnotic tribute to one of the mothers of the dead and is probably one of the poems Ali Smith is thinking of when she associates Bernard’s work with that of W.H. Auden. 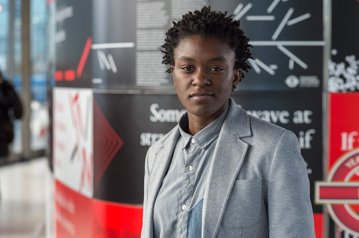 But when the device of haunting and haunted voices is abandoned, Bernard’s work drifts quickly towards the literal and succumbs to the pressure to record events and places (the downside of the archival instinct). A tribute to Naomi Hersi, a black trans-woman found murdered in 2018, sadly doesn’t get much beyond plain location, a kind of reportage and admission that it is difficult to articulate feelings (‘Pem-People’). There are interesting pieces which read as autobiography – a childhood holiday in Jamaica, joining a Pride march, a sexual encounter in Camberwell, but on their own behalf Bernard seems curiously to have lost their eagle eye for the selection of telling details and tone and tension flatten out:

The bus heaves past Loughborough, to Camberwell,

to the green, buzzing with students drunk on Friday,

drunk on art and trendy and young: wine bottle young, 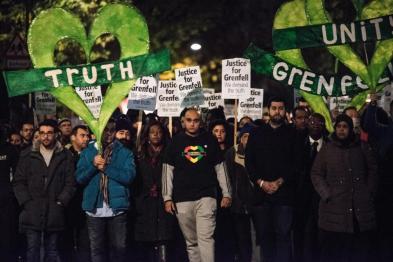 The mirroring architectonic of the collection emerges with the poems written about the Grenfell Tower fire. So we have ‘Ark II’, two pools of prose broken by slashes which seem to be fed by too many tributary streams: the silent marches in Ladbroke grove, the Michael Smithyman murder and abandoned investigation, Smithyman’s transition to Michelle, and the burning of the Grenfell Tower effigy, the video of which emerged in 2018.

In an earlier blog post I was thinking about “the (in)adequacy of a certain English poetic voice to confront the scale of ecological issues, or as a vehicle for expressing certain cultural differences, or as a way of exploring the kind of tragic and grievous event represented by the Grenfell fire and its aftermath”. I think Bernard offers answers to this sort of question in their New Cross Fire poems but the challenge of Grenfell (is it the lack of historical distance?) does not yield the same sort of success. The final poem in the book, ‘Flowers’ is a case in point. Each quatrain carries a rhetorical question, creating a formal rather than urgent or passionate impression, and the valid question is will “anybody speak of” the kinds of issues raised elsewhere in the book. Yet the canonic imagery invokes the speech of flowers, the transition from summer into winter (done much more effectively in ‘Stone’). In the context of a live reading, in the context of the horror, the grief, the injustices, the historical perspectives raised so very successfully elsewhere in Surge, I’m sure this sort of poem has an impact. But in the cold light of day, Bernard’s voice here sounds confined by expectations they ought to be ignoring and ends by giving a rather awkward performance – especially when it’s compared to the fluid, passionate, skilful, clever, eloquence of something like ‘Songbook’.