The winner of the Fenton Aldeburgh First Collection Prize 2014 – one of the most long-established poetry awards in the UK – was announced at the opening of the 26th Aldeburgh Poetry Festival on Friday 7th November. The judges were Imtiaz Dharker, Robert Seatter (Chair) and Anthony Wilson. Here, Anthony Wilson assembles the competitors on his own blog: http://anthonywilsonpoetry.com/2014/11/08/the-fenton-aldeburgh-first-collection-prize-2014/

And here’s the review I did of the book a few months back for Poetry London:

Mort’s first collection has been much anticipated (no-one else has been five-times winner of the Foyle Young Poets Award!) and Chatto have snapped her up but given her a rather ugly cover with its chalk-board script and rotated image of police confronting striking miners in 1984. Michael Symmons Roberts identifies the bedrock of the book as “the north of England” and the semiology of Division Street means the reader anticipates something more politically engaged than the poems deliver: this is not Heaney’s North, a bit more North of Boston. The north is often setting if not subject, but it is a place almost too recognisable where a girl learns “the name / for artificial hills, the bridge / where a man was felled by bricks / in the strike” (‘Twenty-Two Words for Snow’). She might learn to dance, but sniggers at the teacher’s pretentious “parr-durr-shat” (‘Miss Heath’). A man grows old “in the same bungalow for thirty years / and dreams of digging his way out” (‘Fur’). A stage comedian gets a more lively balladic treatment which suggests a more resilient culture amongst the “empty works” and “braziers / that vanished thirty years ago” but the juke box still dates from 1971(‘Stainless Steven’). 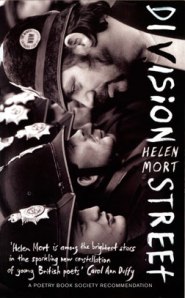 The risk is regional cliché here and I’m not sure this is really Mort’s true subject. The miners’ strike is dealt with via a re-enactment of the battle of Orgreave by conceptual artist, Jeremy Deller, in 2001. Mort’s desire to write about it is important but the sequence of poems is more an exploration of good old class guilt as the narrator leaves the “Calow WMC” to study in Cambridge, a place where she “cannot learn the tune”. The resonating image is of a different “picket line/ . . . crossed” into a “gilded College gate, / a better supermarket” (‘Scab’). This is why Mort’s epigraph is from Stevenson’s doppelganger novel about the “profound duplicity” of life, but both writers are less concerned with political divisions than personal. Much of Division Street is given over to explorations of the self’s development. The finely-tuned sequence, ‘North of Everywhere’, treats location as psychological landscape where the heart can be let “go on ahead of me”, where “silences become the better part of us”. Such questing is transmuted to a mother gazing at a group of deer, “on pound-coin-coloured hooves”. They are something she denies seeing, though the daughter also finds them, “closer / than before [. . .] their eyes, like hers” (‘Deer’). There is a recurring sense that “doors to other worlds exist” (‘Lowedges’). However much a narrator likens herself to her dogs, she is different:

one night I’ll set off past the meadow, down

behind the beck, beyond the blunt profile of Silver Howe

and nobody will call me back.

Mort’s love of landscape is profound and, like Wordsworth, her hills and skies remain a locus, as well as image of, the process of self-exploration. She boldly plays on her own name in ‘The French for Death’, fantasising of a “girl / who takes the worst route home, pauses // at the mouths of alleyways, or kisses / strangers”. But this transgressive trouble-maker is not so prominent elsewhere where a more compromised, tentative identity emerges. ‘The Girl Next Door’ becomes a haunting double who seems to co-opt the narrator’s weakening identity. ‘The Year of the Ostrich’ wittily suggests a new astrological sign for those of us with “unlikely grace, / who hide our heads, or bear the weight / of wings that will not lift us”. Mort is always good at animals and while jogging she sees a fox, supple, slinking, sly, always about to vanish: “And what she sees she cannot tell, / but what she knows of distances, / and doesn’t say, I know as well” (‘Fox Miles’).

We find and define ourselves against others and Mort does this through romantic love, mostly its loss. “I turned to ask you something and you’d gone” (‘Fagan’s’) is a recurring sentiment. The title poem itself refers to the place where “You brought me [. . .] to break it off”, though in this case it is the other whose “head-down walk” we see, passing pubs in whose windows can be seen “nothing but your own reflection”. Pessimistically, ‘End’ suggests that “Death is // the shape / beneath romance” but the hauntings a writer sustains through such poems as these, though they do not revive the love, at least reinvigorate the lover and persuade that such deaths may only be “le petit mort”. 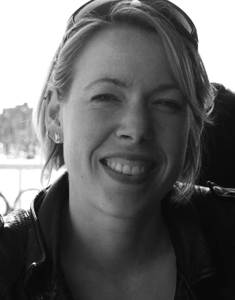