A remarkable thing has happened in our house this week. My daughter’s room has been tidied – and it has remained that way.

The duvet is unrumpled on the bed. A phone charger remains thoughtfully unplugged on the floor beside the bed. The pages of Donna Tartt’s The Little Friend have not been turned any further. The few coins on the desk wait to be spent. No rubbish is accumulating in the plastic bin beside the desk. A laundry basket has been emptied and seems not to be refilling as it usually does. There are few clothes hanging in the wardrobe. The door stands open onto the landing for days on end. There is hardly a movement in the wave-shaped mirror beside which, vertically, a friend wrote in pencil  ‘Don’t crack the mirror’. Actually, to be truthful, there is the slightest of motions to be seen there – it’s me standing in the centre of the room, staring around.

We took her to university last weekend. We miss her. And in the absence of more detailed news we’re pretty sure she’s having a good time. She’s never friended us on Facebook but she somehow did so ages ago with my parents. So we hear remotely about smiling pictures, roseate cheeks in flashlight, black backdrops. I think yesterday she was supposed to be attending her first dissection (I remember that vividly – more of that in a later post perhaps).

In the mean time, to wish her well and permit myself some lovely sentimental thoughts of her in younger days, I thought I’d post a couple of older pieces I wrote which feature her. 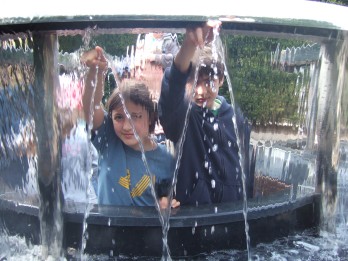 Both these poems originally appeared in Hurt (Enitharmon, 2010). The first derives from a walk we pursued when she was about 5, I think. By walk I mean, she walked a bit and I carried her on my shoulders the rest of the way. This was probably in the hills near Sedburgh – sheep country, close-cropped grass, heather, little stony paths. I suspect we plotted a waterfall or two into the route for a few squares of chocolate (temptation) for her and her older brother.

One thing after another

The ivory, angular vertebra I found
the day after the day my daughter found

and tried out her new word – fuck –
was bony, spiky to touch, rough as fuck.

I thought: Depths! Essence! Bone!
She bent to it, touched it, turning bone.

Leave it, I called. She said, Is it real?
White in the grass the contrast was real. 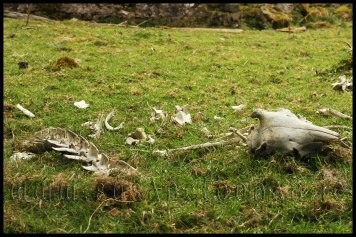 The second poem is later, from an occasion when we were visiting Canadian cousins, staying in a house in the Lake Country north of Toronto. To me it felt like something out of early Margaret Atwood and we spent ages fishing from the rickety wooden dock, paddling in a rowing boat and (as here) swimming out to a tethered raft (she has always been a good swimmer). 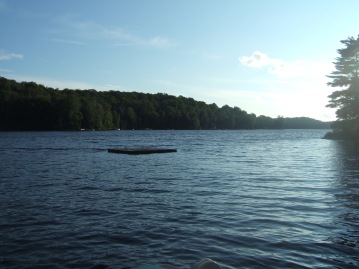 There is a well-buried allusion to Milton’s Paradise Lost in the middle of this poem – from the description in Book 1 of the fallen angels or devils closing in around Satan (“their doubl’d ranks they bend / From wing to wing, and half enclose him round / With all his peers” ll. 616-8). This is the second part of a sequence called Wilderness:

See my flesh and blood

as a sun on the rise,

from the anchored platform,

flies into the air

over the blue-lit water,

to her vigorous action.

Here she is, hanging,

all parts my daughter,

while the white trunks

and enclose her round.

All sounds hang back

as she arcs and peaks,

to the pull of gravity,

the smash of water,

of foam and white limbs

yellowing as they spread

to carve out stroke

into the swims of joy 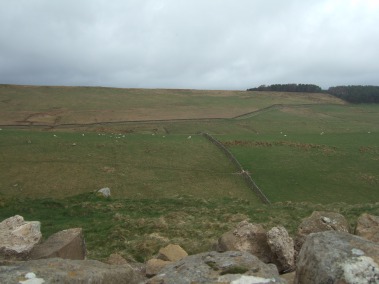