My blog post a couple of weeks ago on ekphrastic poems (ie. poems stimulated by visual art) proved to be one of the most popular I’ve ever written. This was in part the ‘how to’ aspect of the blog. In preparing to run a workshop at the Holburne Museum in Bath in February, 2017, I’d been reading a wide variety of poems derived in some fashion from the poet’s encounter with visual art and I tried to categorise the various approaches. I came up with 14:

While at the Holburne Museum I was given their recent anthology of ekphrastic poems, From Palette to Pen, edited by Frances-Anne King in 2016. It contains 20 poems stimulated by art objects in the Holburne and as well as recommending it as a great resource for ekphrastic writing, I thought I’d use it to test my earlier analysis of the form to see if it held water.

It did pretty well. It goes without saying that all the poems engaged to some degree in method 1 – description of the art object itself. But beyond that, by far the commonest approach was method 4 – making the main figure speak. This was adopted by Anna-May Laugher, Claire Dyer, Carrie Etter, Frances-Anne King, Pascale Petit, Linda Saunders and Lesley Saunders. Petit manages to make Adam speak, remembering his naming of the animals; Claire Dyer makes Rosamund Sargent speak from her own portrait by Allan Ramsay; Lesley Saunders makes one of the sisters, Alicia and Jane Clarke, speak and so betray their “little sisterly difficulties”. 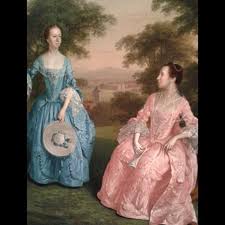 Another common approach was my method 8, an interrogation of the artist (without getting the artist to actually speak for themselves (method 7)). Jenny Lewis’ poem on a 17th century Rosewater basin began in this way, inquiring “What’s on his mind as he hammers / the silver, makes light flower”. Her poem goes on to incorporate some obvious research into the object too (my method 3) which takes her poem away from a narrow view into the colonial world of “London, the world, New England” in which it was made. David Hale, writing about Jan Asselyn’s ‘Landscape with Drover’ also imagines and interogates the artist’s approach, gazing at his own picture in process:

Ah, the south. He feels the heat of it

on his face and hands, smells dust, dung

and crushed thyme as he sips his coffee,

wonders again what the bull is looking at –

where time and life have gone.

I’d be tempted to widen this category of approach – or even introduce a new one – because several poems in the anthology interrogate the artist specifically about the artistic methods used to create the art object. Sue Boyle does this in detail about the making of Antonio Susini’s bronze figure, ‘Crouching Venus’: “Coated in plaster, lowered into fire, / she must be negated, melted from her mould”. There are also elements of this approach in the poems by Dawn Gorman and Phillip Gross, the latter dwelling as much on the making of a Beadwork Basket as on its illustrations of Charles II and Catherine of Braganza. Gill Learner’s poem also looks over the artist’s shoulder as he glazes a 15th century earthenware dish.

My method 9 – interrogating or engaging with one of the figures in the art work – was used by Caroline Heaton, Wendy Klein and Tim Liardet. Klein and Liardet both directly address figures in the image (for example, “Someone chose the best for you, Mary Bourchier” and “You let the baby grip his fingers”). Heaton’s engagement with Plura’s marble statue of ‘Diana and Endymion’ is a bit less direct, using the third person (rather than a second person address) to think herself into Diana’s state of mind:

Confined to the island

of the self, she laments

the chill of her lunar circuit, 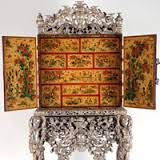 Rosie Jackson approached a piece of furniture, ‘The Witcombe Cabinet’, via a brief description of it but quickly developed thoughts about her own mother and indeed herself which I’d take to be my method 10 – using the art object to interrogate or enquire into one’s own life: “”My mother would have loved it here, / the roped off beauty […] But I ask questions of locked drawers”.

I think Claire Williamson mostly used method 3 – describe and make use of researched materials – in her poem on Thomas Barker’s painting of ‘Priscilla Jones’. The relationship between the sitter and the artist is the focus here, their romantic engagement and subsequent “passionless” marriage. In fact, I’ve not checked details of the painting/poem and I suppose it maybe that Williamson is making all this up – in which case she’s adopting method 2 – describe and imagine beyond the frame as George Szirtes does in anticipating the adult life of the boy in ‘Garton Orme at the Spinet’.

So the methods used in this anthology are fairly limited – seven of the fourteen I proposed. Those not adopted here are several varieties of ventriloquism (getting minor figures or objects to speak up; getting the artists to speak directly), the kinds of poem that more narratively describe encounters with art objects in a gallery or other location and a more tangential approach.

Finally, Lawrence Sail’s poem describes a Mantuan School ‘Female Head’ and is probably the ‘purest’ ekphrastic poem in the anthology in that it does little more than describe the image – method 1. However, Sail addresses the woman imaged as “Our lady of the liminal” and as such he breaches the borders (“offstage”) a fair bit, beginning to imagine beyond the frame to some degree (method 2). It’s a lovely poem and deserves quoting in full:

Our lady of the liminal –

witness at her back the margins of

and the focus of all her attention

But the heart of the story is locked

in the ghost of her gaze – its candour,

of grief, a drift to the verge

And everywhere, time on the make –

in the darkening turquoise of the sky,

of the trees, the craquelure moving up

to infect her soft features.