This week, at the Omnibus Theatre on Clapham Common, I was invited to deliver a brief, personal talk about Lorca’s poetry, particularly from the perspective of translating it. I have always found his poems difficult to work on – beyond a superficial level – though, as what follows suggests, I hope I have made some headway with it over the years. There are plenty of very poor translations around. I’m posting two blogs on this and including two of my own translations, the first, unpublished as yet, the second appeared  a while back in a small magazine. I’ve left my talk pretty much as . . . My translation of ‘Reyerta’ can be found at the end of the posting. I will post on the even more astonishing poem, ‘Romancero sonambulo’, next week.

My personal story with Lorca maybe begins even before I’d read him. When I did come to read him – in a Penguin Modern Poets collection with (quote) plain prose translations – I didn’t get it. Later – as I often calculatingly do with a poet I don’t get – I tried to translate a few poems. To begin with, I didn’t get it then either.

Actually, my problems are genuinely surprising, in retrospect, as I’d long before this responded powerfully to something which I can now see had a strong Lorca quality to it. Let’s go back to the early 1980s. Imagine the beard, the much longer hair. The ignorance . . . A friend of mine loved his Irish folk music. He told me to listen to a song sung by Christy Moore. I say a song – a ballad really.

The song’s voice (a young man) tells us he went to a wood, he cut a branch of hazel, went fishing with it and caught a trout. What drove him was the fire in his head. The scene is vividly conveyed, neat turns of phrase like the white moths and moth-like stars and, as he lights a fire, the trout turns into a girl who calls to him but runs off.

Then the youth’s narrative jumps – the kind of moment that really does take the top of your head off. The voice concludes:

Though I am old with wandering
Through hollow lands and hilly lands,
I will find out where she has gone,
And kiss her lips and take her hands;
And walk among long dappled grass,
And pluck till time and times are done,
The silver apples of the moon,
The golden apples of the sun.

I really didn’t know it at the time, but the song’s words are, of course, by W.B.  Yeats. It is his poem ‘The Song of Wandering Aengus’, from The Wind Among the Reeds (1899).

But I knew well enough that I found it moving – the yearning of the narrative, the devastating presentation of time passing, the strange images and most of all the mystery that spread itself over the whole like endlessly suggestive moonlight.

And so eventually, in Lorca too, I began to understand three big things – his poetry’s sense of generative mystery, the strange unexpectedness of his images and the boldness – the jump cuts – of his narrative development.

I’m focusing on these things tonight and what better place to start than a lecture he gave. Lorca typically (both self-deprecating and boldly idiosyncratic) calls it rather a talk about something no one has taught him – a lecture about the collection of poems called Gypsy Ballads. He published this best-selling book in 1930 and here he is speaking in October 1935. Of course, within the year he would have been murdered, his body dumped somewhere never to be found.

But in these lecture comments, we catch the man very much alive, I think, plus the poet’s love of outlandish metaphors. He says that lectures, in the traditional sense, tend to “fill the audience’s eyes with the pinpoints where Morpheus hangs his irresistible anemones”. For those of you already nodding off, he means in such talks we often fall asleep. Or at least, the speaker inadvertently fills the hall with “yawns too big for even the mouth of an alligator”.

I have now translated a number of Lorca’s poems and one of the great difficulties is to carry over such metaphorical leaps into English where they risk sounding very silly indeed. Fair enough, the alligator is, on the face of it, obvious enough: its gaping jaws give a good jolt of comic hyperbole to his image. But it’s still surprising in the context of a be-suited, bespectacled lecture hall in Spain. There is an exoticism there on the verge of surrealism and is characteristic of Lorca’s images. This search for novelty in image is clear when he argues later that a real poet must “shoot his arrows at living metaphors and not at the contrived and false ones which surround him”.

The Morpheus image does something else which is typical. Lorca takes up a creaking old mythic figure and with his sustained and vividly specific imagination, a vigorous verb, plus the kind of adjective on which he always liked to turn the volume up to 11, he brings the god of sleep and dreams to modern life: “the pinpoints where Morpheus hangs his irresistible anemones”. This sort of thing really is at the heart of Lorca’s project to take up traditional forms and stories and invest them with a modern vitality. One of his fellow students in his brief time at Columbia University reported that for Lorca, “new metaphors were the core and mainstay of any new poetry [. . .] Lorca’s central idea in writing was to employ phrases which had never been used before [. . .] an attempt to place together two things which had always been considered as belonging to two different worlds, and in that fusion and shock to give them both a new reality”.

This is the root of his belief that by means of poetry “a man more rapidly approaches the cutting edge that the philosopher and the mathematician turn away from in silence”. Never a proper, card-carrying surrealist, we can see why his work was working along that same grain. The well-honed, well-trodden, conventional, empirical/logical grooves of the philosopher or mathematician need a down-right shake up and poetic images easily seize the liberty to do this.

The Gypsy Ballad called ‘Reyerta’ or ‘The Quarrel’ or ‘Fight’ shows a lot of this for me. Lorca’s own comments on the poem suggest his interest in the way groups attack each other for unlikely reasons – a glance, a rose, a love affair centuries old, a man feeling a bug on his cheek. It opens:

Halfway down the gulley,

Like fish? A surprising image – but perhaps the silver and red (of fish fins; of steel and blood) makes this a vivid visual opening to the poem. But the surprise holds my attention; I can’t dismiss the slipperiness of the fish, the literal and metaphorical slipperiness of knives in a fight, perhaps the speed of movement of fish/fighters.

The images of the next quatrain are vividly expressive but hard to be literal about:

The women weep but to see them apparently perched in a tree top explains less and reveals more. So – they are far from the quarrel, putting distance between themselves and the ruckus, and where better than an olive tree, symbol of rootedness, domesticity perhaps, a long rural history, the bark’s wrinkles echoing their old weeping faces. Then the quarrel as an utterly non-literal, aggressive bull might seem an obvious image but again Lorca fixes our attention and conjures an independent life for it – as in a bullfighting ring – crashing into walls, even beginning to climb them. 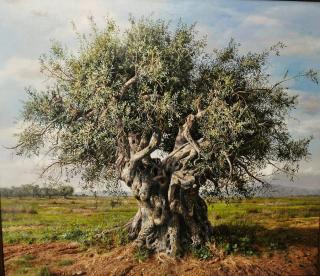 Mysterious black angels float through this poem at various moments. They are partly obvious, ominous, harbingers, though not of salvation but doom. Again, Lorca commits to them, commits details to them which tend to deepen the mystery of their significance: they are “bringing / meltwater, handkerchiefs. / Angels with wings as wide / as these Albacete knives” and, at the conclusion of the poem, they are seen “wheeling / in the air to the west. / Angels with trailing braids / and with hearts of oil”. With hearts of oil? Golden, greasy, liquid, melting, fast-beating, lacking healthy blood, anointing the earth, the good stuff spilling everywhere? Its meaning is a mystery and I suspect one Lorca would not venture to explain himself.

Just one last detail from this great poem. Juan Antonio de Montilla is killed in the fight and – in one of Lorca’s characteristic jump cut edits (more of that in a minute) suddenly (it seems) the “judge and Civil Guard / come through the olive groves”. Somebody – a participant, one of the old women? – gives them an account of events in the form of exactly one of Lorca’s startling metaphors. This may have been a quarrel over a card game, or a girl, like so many others, but Lorca dizzyingly elevates it into an historical, even epic context:

Here is my translation in full – the original Spanish follows:

Halfway down the gulley

Angels with wings as wide

as these Albacete knives.

rolling dead down a slope,

his body full of irises,

pomegranate on his brow.

He rides a cross of fire now

down the road to death.

The judge and Civil Guard

as have five Carthaginians

faint on the wounded

thighs of the horsemen.

in the air to the west.

and with hearts of oil.