An interruption to blog-casting over the last couple of weeks as I’ve been away from the desk, here and there, partly in Wiltshire visiting my 90-year old parents.

I’ve long understood that one of my triggers as a writer is the simple disparity between ‘then’ and ‘now’. I have grown convinced that an individual’s mental health is partly dependent on the free flow of thoughts and feelings between personal present and past, the integration of personality, a sense of coherence, or organic change, over time. There has been a good deal of research recently on the idea of nostalgia as a healing force (hence some of these dips into autobiographical mode) and I’d like to talk more about that sometime. But for today, while staying in Wiltshire, I came face to face with a pretty powerful example of this disparity between past and present. Here it is: 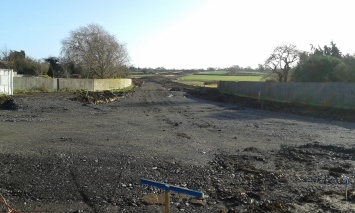 OK – it’s not much to look at, but this is the final route of the Hilperton Relief Road, designed to take traffic away from the village where I grew up in Wiltshire. My father has been praying for this to happen for years, convinced the thundering, articulated transports that pass the house originate solely from ‘the Continent’. It’s true they do have to manoeuvre through the village itself, but the route cuts across green fields just a stone’s throw from the little village church of St Michael and All Angels, fields where I’d mooch about as a kid with friends from the self-build estate of Marshmead.

So a personal wound to my memory – but also an ecological blow to the rural area. Within a few years – though the local authority currently denies this – the meadows surrounding this new road will be filled in with houses and the ghastly sprawl of Trowbridge town will engulf another village. More lucrative land for developers is the prime motivation for building the road after all these years. More personally, on the bulldozed soil in the first photograph once stood a few ramshackle buildings, little more than large garden sheds and fogged, filthy-windowed greenhouses. This was the site of Stokes’ Garden Nursery where I worked a few hours a week at the start of the 1970s.

Stokes’ Nursery is on the left at the far end of Horse Road as you head into town. I cycle along there one Sunday and find Old Stokes out in the open, moving up and down the sunlit rows of chrysanthemums, lifting the still-tight flower heads to examine them, pinching off a browned leaf here and there. It appeals to me – the money and the work.

The following Sunday, on my first morning, he musters a smile of sorts in greeting. He is bent with age, rather hump-backed and moves with a limp. His head is small and round, a few wisps of grey hair, and he purses his lips so that in speaking there is a faint lisp. But he doesn’t often speak and I like that.

I begin reliably turning up and taking his cash, at first just Sundays then Saturday mornings as well. I find myself beginning to identify with him in little ways. His wife is invisible. Their detached house is set off to one side of the grounds where he has several glass houses and outdoor growing areas. The house always appears deserted, with the curtains closed for the most part. Nothing moves or changes. No-one sees her. Old Stokes never talks about her. I never ask. She suffers from agoraphobia, or so my Mum tells me.

One morning, he leads me through the rickety door of the main glasshouse into its humid, stuffy other world, reeking of compost, plant rot, fertilizer, cell division. “Pricking out”, he murmurs and I wonder if I have heard him right. At an earthy metal bench, backed with a window so filthy nothing can be seen but a fuzz of sunlight, we stand side by side and he shows me what to do. The seedlings are new-grown in their first trays and each has to be gently teased out of the loose soil and away from its clinging companions. Then each spindly seedling, green leafed, pale-stemmed, white-rooted, is tucked into a new hole (drilled by the ‘dibber’) in a newly prepared tray. Pricking out is boring and brainless. It’s not something I am unhappy doing, bearing in mind I am getting paid a few shillings – after February 1971, thirty or forty pence – to do so.

But I prefer watering; lugging the python-like, yellow hoses up and down the glass house aisles, pulling the trigger on the hose attachment and spraying water everywhere, dampening the already humid atmosphere. Soon I am promoted to patrolling the rows of vigorous chrysanthemums, lifting the heavy weights of the flower heads, picking out ear-wigs where I find them, dispatching them with a curt rolling of my thumb and finger. Crouching down between the rows, I disappear completely from the view of anybody passing along Horse Road. Crouched there, I am in a manageable jungle, happy to be alone, often bringing my family’s old blue transistor radio with me, listening to Noel Edmonds (from October 1971), his Sunday morning slot from 10-12. His kind of drippy folk-rock is (I’m afraid) what I like to listen to and David Gate’s songs like ‘Diary’ and ‘Baby I’m-a want you’. McCartney’s first solo album is being played. Cat Stevens has released ‘Tea for the Tillerman’ the year before and ‘Teazer and the Firecat’ in the autumn.

Twenty years later, in my first book from Enitharmon Press, Beneath Tremendous Rain, I published a triptych of poems about Old Stokes, his wife and the boy working for them. Here are the two best ones:

See how my wife hasn’t bothered to open

the curtains. It’s three o’clock. She must be bad.

She thinks I don’t know what it costs her

to steal a glance at me outside, to brave

these fifty feet of open space, her weak legs

trembling with terror, sick in her belly,

knotting ever closer round her poor heart . . .

I’ll cut some chrysanthemums to please her.

My flowers always please her.

Years ago she’d tell me how it felt.

She’d say a bulb will sometimes come up blind

no matter how carefully you’ve set it down.

It’s the way of plants. There’s no cure at all.

But it’s not only her. Still poor as Adam,

there’s just one thing I have that’s in demand

tending soil into flower should gain nothing

but a touch for dressing death in glad rags

with some careful blooms on a wire frame . . .

My one extravagance:  that I can charge

higher prices than most and though Christmas

is a boon (when my great medals hang on

many bolted doors), yet it’s the year-round trade

in bereavement that keeps this place afloat.

I’d plans once. A shop, new green-houses, a son.

who help me out. They’re all more or less sullen.

This one’s so quiet, although he chats to girls

across the hedge, as they all have done –

all playing the working-man, hands dirtied,

with the jangle of my money in their pockets.

This one trails his radio around all day long

as if he can’t stand the sound of himself.

slipping down beside the sheds. No radio today.

I must cut some chrysanthemums to please her.

I sit beside my beautiful maidenhair fern.

It likes my darkness, is dank, spreads slowly.

I count my books, silent on their long shelves.

I was not always so understanding – accusations

and resentment shouted him into the garden.

We have not given each other all we’d hoped.

I’ve felt such horror at what lies beyond

the window, where even clothes on the line,

blown by an uncontrollable wind, cardigans

are too much to bear. He has devoted himself

too much to the fertility of row upon row

of plants and had less and less for me.

But we’re past the allotment of blame.

to me and watch like a child while I shook

earwigs in the sink, flushed them out of sight.

An absurd ritual I long for, absurdly,

since it ended these past four or five years

before the hedge was removed to make beds

of carnation. And we’ve no boys now –

as if a supply-line had suddenly gone dry.

They all blur into one – that particular one

who left quickly. Why do I think of him?

He’s forgotten me. Does he have a wife?

And a child? I remember descending the stairs,

past the grave-quiet telephone, with a jug

of water in my hand. I thought I heard

one of the cats, opened a sliver of curtain.

See the boy slumped against the shed

on his belly as if dealing a deck of cards –

but with such unrestrained violence.

He saw me. Gave the look of one who has been

interrupted – annoyance, much more than

the guilt I’d expect. I dropped the curtain,

then wanted to open it again – and it’s that

which fills me now when I think of ‘life’

and then I see myself – the dry, pressed flower

I found once in a borrowed library book,

squeezed out now, frightened of the light.