NB This review first appeared in a shortened form on the Agenda Magazine website. 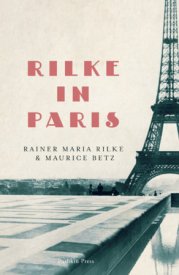 The argument of Maurice Betz’s memoir on Rilke’s various residencies in Paris between 1902 and 1914 is that the young poet’s experience of the French capital is what turned him into a great poet. Betz worked closely with Rilke on French translations of his work (particularly his novel The Notebooks of Malte Laurids Brigge (1910)). Will Stone’s excellent translation of Betz’s 1941 book, Rilke a Paris, elegantly encompasses its wide range of tones from biographical precision, to gossipy excitement and critical analysis. The book particularly focuses on Rilke’s struggle over a period of eight years to complete the novel which is autobiographical in so many ways, as Betz puts it “in effect a transcription of his own private journal or of certain letters”.

Rilke first arrived in Paris from Worpswede in northern Germany, a community of artists where he had met and married Clara Westhoff. But never one to truly reconcile himself either to community or intimacy, he had already left his wife to travel to Paris. Yet the anonymity, bustling energy and inequalities of the French capital appalled him. In letters to his wife and many others, it became clear that, as Stone’s Introduction argues, Paris had “unceremoniously torn Rilke out of his safe, somewhat fey nineteenth-century draped musings”. In ways reminiscent of Keats’ observations about feeling himself extinguished on entering a room full of people, Rilke would later recall how the city’s “grandeur, its near infinity” would annihilate his own sense of himself. Living at No.11, Rue Touillier, these initial impressions form the opening pages of The Notebooks. 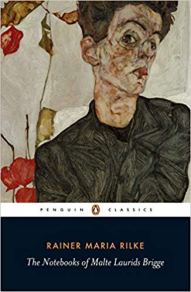 But there were also more positive Parisian experiences, particularly in his meetings with Rodin who he was soon addressing as his “most revered master”. Famously, Rodin advised the young poet, “You must work. You must have patience. Look neither right nor left. Lead your whole life in this cycle and look for nothing beyond this life”. In terms of his patience and willingness to play such a long game, not only with his novel but also with the slow completion of Duino Elegies (1922), Rilke clearly took on this advice. Interestingly, Betz characterises Rilke’s methods of working on the novel, creating letters, notes, journal pages over a number of years, as “like sketches, studies of hands or torsos which the sculptor uses to prefigure a group work”.

Rilke was even employed briefly by Rodin as “a sort of private secretary”. Betz suggests Rilke simply offered to help out for a couple of hours a day with the famous sculptor’s correspondence. But this quickly expanded to fill the whole day and Rilke was soon confessing to Karl von der Heydt that “I must get back to a time for myself where I can be alone with my experience”. A break was inevitable though in later visits to Paris the two artists patched up any quarrel. In terms of his location during this period, Rilke had moved on to the Hotel Biron at 77 Rue de Varenne on the recommendation of Clara. Rilke in turn suggested it as a suitable studio base for Rodin who also settled there and over a number of years gradually took over more and more of the rooms. It is this building that, in 1919, was converted to the now much-visited Musee Rodin.

Betz suggests that the traumatic impact of Paris was the making of Rilke as an artist. Between 1899 and 1903, Rilke had been working on The Book of Hours, representing a “religious and mystical phase”. In contrast, Paris presented the poet with an often brutal but also more “human landscape”. He also discovered this was reflected in the French capital’s painters and poets. Baudelaire in particular was important. In personal letters (as well as in his finished novel) Rilke identifies the poem ‘Une Charogne’ (‘A Carcass’) as critical in “the whole development of ‘objective’ language, such as we now think to see in the works of Cezanne”. Baudelaire’s portrayal of a rotting body seems to have taught Rilke that “the creator has no more right to turn away from any existence [. . .] if he refuses life in a certain object, he loses in one blow a state of grace”.

But it took Rilke a while to arrive at this sort of inclusivity of vision. One of his earliest impressions of the city was that there were invalids, broken human bodies everywhere. “You see them appear at the windows of the Hotel-Dieu in their strange attire, the pale and mournful uniform of the invalid. You suddenly sense that in this vast city there are legions of the sick, armies of the dying, whole populations of the dead”. As Betz points out, this is one of the important observations made by the hero of The Notebooks. It is the “multiform face of death” that Brigge (and Rilke) confronts in Paris. And the irony is not lost on either of them because Paris, of course, at this time was renowned for its social and cultural vitality. Here, Rilke is being forced to make critical distinctions which he then worked on for the rest of his life: “Vital impulse, is that life then? No. Life is calm, immense, elemental. The craving to live is haste, pursuit. There is an impatience to possess life in its entirety, straight away. Paris is bloated with this desire and that’s why it is so close to death”. Years later, near the end of the fifth of the Duino Elegies, Rilke expresses something very similar (tr. Crucefix):

Squares, oh, the squares of that infinite showplace –

Paris – where Madame Lamort, the milliner,

twists and winds the unquiet ways of the world,

those endless ribbons from which she makes

these loops and ruches, rosettes and flowers and artificial fruits

all dyed with no eye for truth,

but to daub the cheap winter hats of fate.

But unlike Brigge, Rilke escapes Paris. Reflecting later, he feared that people might read his novel as seeming “to suggest that life was impossible”. Betz – who had many discussions with Rilke during the process of translating the novel – reports that the poet, accepted that the book contained “bitter reproaches [yet] it is not to life which they are addressed, on the contrary, it is the continual recognition of the following: through lack of strength, through distraction and hereditary blunders we lose practically all the innumerable riches which were destined for us on earth”. Though the Duino Elegies opens with the despairing existential cry (“Who, if I cried out, would hear me among the ranks / of the angels?”), by the seventh poem of the sequence Rilke expresses his affirmative view: “Just being here is glorious!”. In Rilke in Paris, Betz records some of Rilke’s conversations: “Instead of perpetually hesitating between action and renunciation, we fundamentally only ‘have to be there, to exist, that’s all”.

Betz’s admiration for Rilke is palpable throughout this fascinating little book. In its concluding pages, he sums up: “In seeking to express in his own way the world we thought we knew, Rilke helps us to hear more clearly what already belongs to us and permits us access to the most sinuous and iridescent forms, to profound emotive states and to that strange melody of the interior life”. This is marvellously put (and translated). Will Stone also includes a translation of a little know early sequence of prose poems by Rilke, ‘Notes on the Melody of Things’. In it, the poet reflects – through thoughts on theatrical experience and on fine art – on the relationship between background and figures in the foreground. Something of the personal angst and despair of The Notebooks can be heard in section XXXVII where we are told that “All discord and error comes when people seek to find their element in themselves, instead of seeking it behind them, in the light, in landscape at the beginning and in death”. The vastness and reality of what lies behind the solitary figure – and the negotiated relationships between the two – suggests to me that Yves Bonnefoy may well have been thinking of these pieces when he was writing L’Arriere-Pays (1972). Betz is right to conclude Rilke in Paris by praising Rilke as a poet who matured through “solitude and lucid contemplation of the loftiest problems of life”, but also one who never failed in patience or effort to express “in poetic terms the fruit of that inner quest”.