Two weeks ago, I was invited to deliver a brief, personal talk about Lorca’s poetry, particularly from the perspective of translating it. Last week I blogged part of this talk, looking at the poem, ‘Reyerta’, alongside my new translation of it. I confessed then, I have always found Lorca’s poems difficult to work on – though they are superficially both alluring to the translator and seemingly straightforward – though, in what I said last week and in what follows, I hope to show I have made some headway with them over the years. Here, I am discussing Lorca’s well-known poem (also from the Gypsy Ballads collection) called ‘Romancero sonambulo’ or, as it is usually translated into English, ‘Sleepwalking Ballad’. My full translation of the poem appears at the end of the post (an earlier version of it was published in the magazine Dream Catcher). 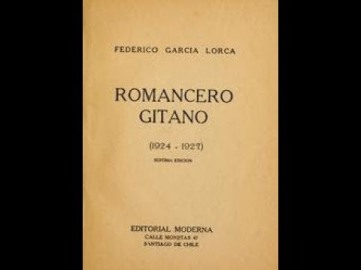 Later in the lecture about the Gypsy Ballads that I referred to in my earlier post, Lorca talks about other aspects of the style of these poems. He says ballads have always depended on narrative – if the ballad poet veers too far towards the lyrical, without an echo of the anecdotal, the result is not a ballad but a song. Lorca was consciously looking “to fuse the narrative ballad with the lyrical without altering the qualities of either”. And he believed he had achieved this especially in the poem, ‘Sleepwalking Ballad’. As he says of it, the poem provides the sense of an anecdote within a very dramatic atmosphere, but this lyrical ballad is also marinated in the most amazing atmosphere of mystery. A mystery that even he, the author, would not penetrate. It opens:

all things are watching her

As narrative this is mysteriously brilliant and brilliantly mysterious. Unlike ‘Reyerta’ the narrative voice is expressive through the technique of repetition – 10 ‘greens’ in the opening 13 lines – suggesting an obsessive love or fascination with the colour green which seems immediately linked to a woman. The balance of the mystery is achieved with the first references suggesting fertility and fecundity, but later ones a rather queasy, uneasy discoloration of flesh and hair. The word ‘green’ almost becomes the woman’s name – “I love you green”. She is the focus of “all things”. As yet, we don’t know why she might not be aware of their gaze. The images of the ship on the sea and the horse on the mountain do little more than extend the horizon of the poem – they suggest this is more ballad than love song. There is a specific context – and, as we’ll see, it’s an important one.

The next section of the poem displays some of Lorca’s startling, surprising images: the “stars of frost”, the “fish of shadows”, the fig-tree’s “sandpaper branches”, the mountain is a “a thieving cat” that “bristles its sour agaves”. These are good examples of Lorca’s technique with metaphor: to place together two things which had always been considered as belonging to two different worlds, and in that fusion and shock to give them both a new reality. But these lines are perhaps really more about raising the narrative tensions in the poem through rhetorical questions such as, “But who will come? And where from?”

Making things no clearer, there follows a section of dialogue, apparently between the house owner and a young man, who is perhaps on the run from the authorities as he is “blood-stained from the Cabran passes”. The young man says what he seeks now is domesticity, to settle down – to exchange horse for home, saddle for mirror, knife for blanket. But the house owner cannot oblige. Not because he does not wish to, but because he cannot. Cryptically, he says “I am no more as I am, / nor is my home my home”. Only later do we (perhaps) understand his utterly compromised position.

It turns out the blood-stained youth is really hurt, from chest to chin. Another of Lorca’s great images: “Three hundred dark roses / spatter your white shirt. / All round your belt / the blood reeks and oozes”. What the two men do agree to do (though the reason for this is not obvious) is to climb to the top of the house – here I imagine a flat roof with balustrades. Here the colour green returns (paint, twilight, treetops?) and a daubing of romantic moonlight. But also – and how ominously we have yet to learn – they begin to hear the sound of water.

So up they climb. We don’t know why, but the atmosphere here is dripping with ill omen: they are “leaving a trail of blood, / leaving a trail of tears”. Then there is another of Lorca’s images yoking together unlikely items. As they climb to the roof-tiles, there is a trembling or quivering of “tiny tin-plate lanterns” and perhaps it’s this that becomes the sound of a “thousand crystal tambourines / [that] wound the break of day”. Lorca himself chose this image to comment on in his talk. He says if you ask why he wrote it he would tell you: “I saw them, in the hands of angels and trees, but I will not be able to say more; certainly I cannot explain their meaning”. I hear Andre Breton there, or Dali refusing to ‘explain’ the images of the truly surreal work. In each case the interpretative labour is handed over to us.

The reason for the climb to the roof-top perhaps only now becomes clearer. One of the men – I take it to be the house owner addressing the youth – asks where his girl is, a girl who used to wait for him on the roof top: “fresh-faced, her black hair, / on the green balustrade!” So the rooftop was one of the lovers’ meeting places. Then there’s another of Lorca’s jump-cuts of overwhelming drama. Up on the roof, as they reach it, over a rain-water tank, hangs a body:

Did they know this? It appears not. But who is she? Daughter? Lover? Both? Is this really what the two men find there? For sure, there is some mystery about the chronology because the seeming explanation of the killing is couched as a flashback: “The dark night grew intimate / as a cramped little square. / Drunken Civil Guards / were hammering at the door”. But Lorca often plays fast and loose with verb tenses. Was this earlier? Were they in search of the rebellious youth? But they found his girl-friend? Hanging her on the rooftop? Is the house owner her father? Does he know what has happened? Is this why his house is not his own anymore? Is this why he is no more what he was? 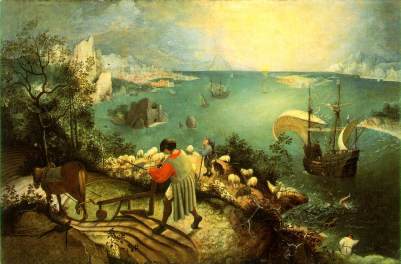 The only certain thing is that the poem does not reply. It ends with a recurrence of that opening yearning – now it’s read as a more obviously grieving voice – though it’s not necessarily to be read as the young man’s voice. It’s the ballad voice, the one I took so long to really grasp in Lorca’s work. It is a voice involved and passionate but with wider geographical, political and historical horizons beyond the individual incident. Like Auden’s ploughman in ‘Musee des Beaux Arts’, glimpsing Icarus’ fall from the sky, yet he must get on with his work, ‘Sleepingwalking Ballad’ returns us in its final lines to the wider world:

In passing, the poem refers to the dead girl as a ‘gypsy’. By gypsy, Lorca said he intended to allude to Andalucia itself, because “the gypsy is the loftiest, most profound and aristocratic element of my country, the most deeply representative”. So there’s certainly a political element to the poem, but that’s an aspect I’ve no time to explore here.

Here is the complete text of my translation:

all things watching her

beside the fish of shadows,

A fig-tree scuffs the breeze

The mountain, a thieving cat,

But who will come? And where from?

Still she’s at the balustrade,

dreaming of the bitter sea.

“Friend, I would love to change

my horse for your home,

my saddle for your mirror,

my knife for your blanket.

“Young man, if I were able,

“Friend, I would love to die

so decently in my bed.

Steel-framed it would be

with sheets of fine linen.

But you see this wound

running from chest to chin?”

All round your belt

the blood reeks and oozes.

“At least then let me climb

to the high balustrades.

Let me climb! Oh, let me

the handrails of the moon,

where the water’s echoing.”

toward the high balustrades,

leaving a trail of blood,

leaving a trail of tears.

A quivering of the roof-tiles’

to wound the break of day.

Green how I love you green,

with the slow wind leaving

a strange taste in the mouth

of bile, mint and basil.

“My friend! Where is she, say?

Where is your bitter girl?

How often she’d wait for you!

How often she’d wait for you,

on the green balustrade!”

as a cramped little square.

were hammering at the door.