Recently, in my local Oxfam shop, I found a remarkably well-preserved hardback first edition of Douglas Dunn’s debut collection, Terry Street (Faber, 1969). Since living in a very similar street in Lancaster exactly 10 years after Dunn’s book was published (Aberdeen Road, up on the northwest-facing terraced streets above the town, looking out across Morecambe Bay to the – occasionally snow-capped – peaks of Cumbria), I’ve always had a soft spot for the book. But I hadn’t read it in years, I now realise.

The particular copy I bought (for £2.50) still had the Poetry Book Society’s Bulletin in it as Terry Street was the PBS Choice for Autumn 1969. It printed a review by Julian Jebb of the PBS’s second Poetry International staged at the QEH, South Bank, in July 1969. Jebb praises the organisers for attending to the faults of the first such event (noted as an over-crowded audience and over-running readings by poets). WH Auden is there in the “blackest of spectacles”, reciting recent work from memory including ‘On the Circuit’ (1963) in which he satirises the lecture/reading round he has been treading in the USA: “so large / So friendly, and so rich”. He read precisely: “15 minutes and hardly a fluff”, reports Jebb. 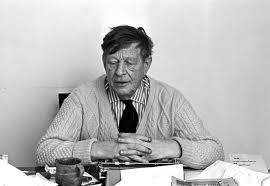 He was followed by “a ponchoed American poet, Robert Bly”. Jebb’s tone here will have been addressed to the original readership of his review (it appeared in The Financial Times) but it’s still an interesting period piece. Bly seems to have flailed his arms while reading “in tragic-comic, uncoordinated circles, strongly reminiscent of Peter Cook’s imitation of Macmillan in Beyond the Fringe”. Later he over-ran shockingly with 20 minutes of his “sloppy, deranged images about Vietnam”. This was delivered, Jebb tells us, to a growing slow hand-clap.

Later in the evening, Edward Brathwaite, Derek Walcott, Ogden Nash, Miroslav Holub, Vasko Popa and Janos Pilinszky also read. Few details are given on these contributions unfortunately, but the experience of the latter three poets of the Second World War and Eastern Europe in the first half of the 20th century prompts Jebb to observe: “We have felt safer than these three men and we are grateful to them for their eloquence in telling us so”. Here is evidence that poetry was making very little happen when it came to the heavy lifting required to shift the entrenched sense of superiority and national egocentricity of the period.

So the review both evokes an earlier age of extraordinary poetry and also shows how far we have come. With Ted Hughes’ and Daniel Wiessbort’s founding of Modern Poetry in Translation in 1965. British poetry was just at this moment becoming exposed to worldwide influences (even if some were hardly listening). In this light, Douglas Dunn’s PBS Choice reads like the dying edge of the 1950s, of The Movement. The Terry Street poems themselves may be memorable evocations of working class life in Hull but what I notice now more than anything is Dunn’s obsessive use of the plural subject: young women, girls, the children, mothers, old men, the chatty women, men of Terry Street, old women, revellers, neighbours, street tarts, trawlermen, young women, the people who live here, men on bikes. These are versions of Larkin’s typological  “cut-price crowd” (‘Here’), the women in ‘Faith Healing’ and the fathers and mothers and newly married couples of ‘The Whitsun Weddings’. The difference is that Larkin would as often turn his acerbic gaze on himself. In Terry Street, Dunn makes the choice to keep himself out of the picture (behind glass) and there are hardly any delineated individuals in the book (though we all remember the man who wheels an optimistic lawnmower down Terry Street).

Dunn viewed ‘these people’ through a window – “our window” says a self-lacerating, retrospective poem of mourning addressed to his late wife, Lesley (‘Envoi’ in 1981). While the belief that these people were a fit subject for poetry is admirable, many of the poems now read as patronising, still mired in the English class system (despite Dunn’s Scottishness). To that extent I disagree with Terry Eagleton who, in 1970, praised Dunn for being able to “transcend the two major pitfalls of poetry concerned with working people – bourgeois voyeurism or sympathetic mythification”. Dunn seems to me to fall foul of both of these.

In the 1969 PBS Bulletin, the young Dunn himself wrote “Terry Street became for me a place of sad sanity . . . an alternative to the gaudy shams everywhere”. It was this sense of the real that Dunn needed (for himself) as a mature student in Hull, pursuing an English degree, and perhaps was a substitute for what he was already declaring: “Scotland is what I most want to write about and what I am least able to”. Later, Morrison and Motion’s 1982 Penguin anthology of contemporary British poets, pigeon-holed Dunn with Tony Harrison in being “sharply conscious of background and upbringing, which sets them at an angle to the cultural establishment”. But Dunn’s chosen strategy in the longer run was to acquire the ‘language’ of the poetic establishment in formal terms and try to speak up for those men and women of Terry Street (or their Scottish equivalent) rather than merely observe them from afar. ‘The Come-On’ appeared in Barbarians (1979):

Our level is the popular, the media,

Unless we enter through a narrow gate

In a wall they have built

To join them in the ‘disinterested tradition’

Of tea, of couplets dipped

In sherry, and the decanted, portentous remark.

Therefore, we will deafen them

With the dull staccato of our typewriters.

But do not misbehave –

Whatever piece it was Bly read that night in July 1969, the voice of the establishment regarded it as threats and thrashings and was too easily able to dismiss it.

How far have we come? Is it still the case that alternative poetic voices look to disguise themselves – whether with formal display like Dunn’s or with an obscuring erudition – to pass through the narrow gate into poetic acceptability? Or is it now that we anxiously seek out and fetishise what is different so poets and their publishers feel the need to define and confine work with USPs like race, gender, sexual orientation, locality, even disease – whole books focused on life events that begin to sound like the prose genre known as ‘misery memoirs’? Do poets actually articulate this to themselves: in my Creative Writing graduation ceremony, how do I ensure I stand out?

Updates on my novel and book reviews