Ian Duhig has recently written for Poetry London about the genre of ‘poetry of witness’ (Poetry London). In 2014, Carolyn Forche and Duncan Wu edited The Poetry of Witness: The English Tradition, 1500–2001 (Norton) and the genre was there described as a tradition that runs through English-language poetry: “composed at an extreme of human endurance – while their authors awaited execution, endured imprisonment, fought on the battlefield, or labored on the brink of breakdown or death”. Though Duhig’s discussion raises doubts about both the genre itself, this definition, and its ethical stance, the two poems I discuss here are surely examples of it.

I’ve recently been reading Choman Hardi’s new collection and the link with Owen’s very well-known (well-studied) poem is obvious. Choman Hardi’s poem ‘Gas Attack’ comes from the ‘Anfal’ sequence in her recent book, Considering the Women (Bloodaxe, 2015). The narrator is a woman whose community is bombed by the Iraqi state in the notorious attacks on the Kurdish people in 1988. Wilfred Owen’s famous poem (‘Dulce et Decorum Est’) draws on his experiences of trench warfare on the Western Front in World War One. Owen’s title is a reference to Horace’s Odes (III, ii l. 13), the full phrase translating as “Sweet and fitting it is to die for one’s country”. It is this sort of ardent, patriotic jingoism that Owen looks to counter in the poem as it is the world’s blindness to real events in Kurdish-Iraq that Hardi wishes to correct.

Structurally both poems are similar in that they open by setting a scene of relative calm even suggesting the ordinariness of what, to most readers, must seem extraordinary. It is into these already difficult situations that the gas attacks fall and both poems (Owen’s at greater length) detail the nature of the attack and some of its immediate effects. Both poems have a third and final part in which they focus on specific victims. In Hardi’s poem this is the son of the mother narrator; in Owen’s case it is one of the gas-affected soldiers, flung onto a “wagon”, and suffering the agonizing effects of the gas. So both poems open, in effect, making use of a wide-angled lens but proceed to focus on individuals and this reflects the shared intention of both authors to elicit understanding and sympathy from their readers. It is Owen who makes this purpose more explicit in the final, bitter address to “My friend” (possibly the jingoistic writer, Jessie Pope, the original dedicatee of the poem).

The scene set in ‘Gas Attack’ is of the routine persecution of the Kurdish people under Saddam Hussein. The deliberate plainness of the opening line (“Bombs could fall anywhere, any time of the day”) with its repetition around the caesura suggests this – as does the unruffled sense given by the line’s end-stopping. The statement that such events are to be regarded as a mere “nuisance” that can be “got used to” wrenches the reader away from the more usual evaluation of such events into a world where these things are everyday incidents. There is however something proleptic about the awkwardly enjambed breaking of line 2, the reference to “shelters” and the unease implied by words like “haunting” and “muffled”. This is confirmed (after 2 more run-on lines) by the deliberate puzzle that the explosions “deceived us”. The faint personification here and the idea that explosions (surely pretty straightforward things) might have the capacity for deception alerts the reader, creating tension: in what way are these explosions unlike other explosions?

Owen’s opening 8 lines are immediately more harsh and noisy though even here there is some sense of routine in that the retreating men “marched asleep” (from fatigue and perhaps on ‘automatic pilot’). The fact they are heading for “distant rest” invites the reader to some mistaken sense of ease (no doubt reflecting the feelings of the men themselves as they march away from the Front Line). But through figurative language and physical positioning, Owen’s men are more distressed than Hardi’s Kurdish woman: “Bent double, like old beggars under sacks, / Knock-kneed, coughing like hags, we cursed through sludge”. Like Hardi, Owen also uses the word “haunting” but here for distant flares falling and the brief, stumbling phrases of lines 5-8 reflect the men’s difficult progress. Such devices elevate the reader’s anticipation of drama to come though again, on the surface, the men have “outstripped” shells (Five-Nines) that are dropping “behind” them. Their deafness to the sound of these shells on one side suggests their (safe) distance from them, on the other, “deaf even” (my italics) implies potential danger to come from this source.

Owen’s lines on the attack itself are a nightmare of panic initiated by the exclamatory, capitalized shouts of the men: “Gas! GAS! Quick, boys!” This is an “ecstasy” in that their consciousness is so agitated and extra-ordinary that they feel to be watching themselves as in an out of body experience (ex-stasis). Their flurry to don gas masks is suggested by 6 present participle verbs in as many lines though most of these are equally descriptive of the poor individual who fails to get his mask on fast enough. Figurative language conveys his agonising plight as he is “like a man in fire or lime” and he moves “As under a green sea [. . . ] drowning”. By contrast, the impact of the attack in Hardi’s poem is at first a strange calm, once again related to the deceiving nature of these Iraqi bombs (thought to be conventional; in reality chemical weapons). Owen’s men are familiar with these chemical weapons; Hardi’s Kurdish community is not – yet. 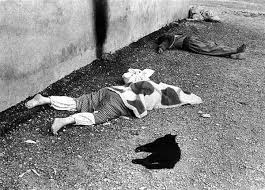 There is still no shift to the level tone of Hardi’s poem, even as the mother narrator observes how “a chalky-yellow powder settled // on our skin”. These lines seem to extend time agonisingly for the reader who, aware of the topic from the plainly informative poem title, waits for the narrator to comprehend events. In contrast to Owen’s figurative language of pain by fire and water, Hardi’s narrator’s ignorance (and therefore her innocence) is caught in her image of the powder “smelling of sweet apples at first” and it “seemed safe”. It’s the caesura of line 8 that marks the transition from ignorance to knowledge as the impact of the gas is evoked (again through a series of active present participles (going, laughing, buckling, twisting running, bumping)). The people’s erratic, tortured behavior has a black comedic, or surreal, quality which probably suggests the few shreds of the observer’s naivety (something Owen’s more experienced narrator never expresses).

In a notable contrast between the two poems, lines 15/16 of ‘Dulce et Decorum Est’ break from the retrospective narrative into the present tense (“I saw him [. . .] He plunges”). The lines provide another image of sight, perhaps launched partially by the heightened visual quality of the glimpse of the man “through the misty panes” of the narrator’s own mask. But in these lines the “helpless sight” is one derived instead from dream-vision and memory. The fact that, at an undefined moment after these events, they still haunt the narrator gives additional weight to the horrors unfolding in the past tense narrative. 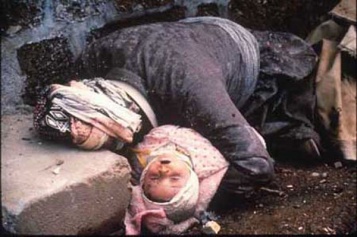 This is not something Hardi’s poem does and to this extent Owen’s narration is more complex, implying an attitude towards the events which emerges most obviously in the long single sentence of lines 17-25. The third section of Hardi’s poem continues with the level-toned witnessing: “Villages from the region came to our aid”. At first it seems curious that they are the ones to draw attention to the narrator’s son who “looked strange”. At this point it is almost as if the mother does not want to refer to her son’s injuries, a kind of denial, though eventually it emerges that it is her own blindness (as a result of the chemical weapon) that has actually prevented her even seeing its effects on her son. The boy’s strangeness is conveyed in the plain statement that “his face was blistered, blackened” but also through the strange phrase (difficult to visualize) that it was “as if his eye-colour had spilt // out”. This probably refers to the “blackened” image but also suggests the physically horrific melting of eye-balls not unlike Owen’s “white eyes writhing” and the dissolving of “froth-corrupted lungs”.

Hardi continues to hold back the fact of the mother’s blindness which accounts for the recourse to the aural image of the boy’s groan “like a calf faced with the knife”. This in turn conjures up Owen’s opening to ‘Anthem for Doomed Youth’: “What passing-bells for these who die as cattle?” I don’t see influence here other than the fact that both writers are wanting to evoke sympathy by drawing attention to the dehumanising impact of warfare’s mass slaughter. Hardi’s narrator finally reveals her own injury (“I was still blind”) and after another run of destabilizing enjambment (ll. 11-14) the last line is more heavily punctuated, slowing and emphasizing and again keeping the tone level and factual: “he / died, [I] could not see him, did not say goodbye”. The mother’s passivity is very prominent; her hopelessness is what expresses her grief. It is as though the continual persecution and horror has left her drained even of the energy to mourn with passion.

This is obviously very different to the passionately angry conclusion of Owen’s poem. Owen’s focus on the dying soldier begins at line 17 but its vivid descriptions of the man’s death are already contained within a hypothetical syntax – a point is evidently being made with the surprising appearance for the first time of the second person pronoun (“you”). Far more assertively than Hardi’s poem, Owen demands his readers, those who knew too little of the realities of warfare in 1918, put themselves in a position of greater insight: “pace / Behind the wagon that we flung him in, / And watch”. Likewise Owen does not pull punches in terms of the gruesome description of the soldier’s suffering with his “writhing” eyes, his “hanging” face (upside down, hanging off the wagon?), his “gargling” lungs. The two similes he introduces achieve the same levels of hyper-intensity with the suffering “as cancer” (obscurely or – in another draft – obscenely) and the blood in his throat like a “cud”, yet another livestock allusion to match Hardi’s doomed “calf”. The cud on this occasion is itself developed metaphorically into “vile, incurable sores on innocent tongues”, further emphasizing the appalling injustice of this slaughter.

It’s at line 25 that the “you” is addressed more directly with the ironically amicable “My friend”. The “zest” and “arden[cy]” of those eager for patriotic glory is mocked (“glory” rhyming with “mori”) but the potentially ‘hedging’ effect of these ironies is vigorously and fiercely pushed aside by the plainly monosyllabic description of the Horatian tag as “The old Lie”. Owen’s poem takes the reader into the trenches, to the post-traumatic world of nightmares, but also manages to encompass this declarative, even propagandist, point. Likewise, Hardi’s poem plunges us into the gas attack and its aftermath but never ventures into the same argumentative, passionate point-making. Her decision to allow the details of this poem to speak for itself is a brave one (of tone and manner) given the horrors of which it speaks and the author’s evident commitment to bringing them to notice.