This is the second in the series of reviews I will post over the next two months of the 5 collections chosen for the 2016 Forward Prizes Felix Dennis award for best First Collection. The £5000 prize will be decided on 20th September. Click here for all 5 of my reviews of the 2015 shortlisted books (eventual winner Mona Arshi).

Thanks to Enitharmon Press for providing a copy of Nancy Campbell’s book for review purposes.

The concluding poem of Nancy Campbell’s collection Disko Bay is, I think, a good place to begin. In ‘Giving Up on Capitalism’, an unnamed boy makes kayaks and sells them for one, then two kroner (these poems are mostly set in Greenland). He hands his earnings to his mother who buys basics like coffee, sugar, needles, cotton and, more ominously, whisky. If this is the nirvana of capitalist enterprise it hardly gets beyond subsistence level and then only to poisonous effect. On the third occasion he instead decides to construct a kayak for himself: taking the few remaining skins, he “pegged them down deftly / and paddled away”. The point of rejection is simply made, but the simplicity has a mythic, typological impact. The poem’s form is simple, repetitive, like a piece of folklore, an oral transmission perhaps, and – characteristic of the whole collection – the vocabulary is plain to such a degree that the reader is impressed by a paucity or poverty or essentialism (depending on how successful you think it is). Certainly this is a book unlike any other you’ll read this year, drawing on myths and landscapes of the far north (the opening section of the book has poem titles in Greenlandic first, then English). Its impact is often impersonal but Campbell’s knowledge derives from her several residencies in the region and she deploys it in a skilful and poetically knowing fashion.

Above all, these poems convey the harshness of scraping a human existence in the Arctic Circle, perhaps most obviously in the section called ‘Ruin Island’. An epigraph quotes the Eskimo, Osarqaq: “Our tales are narratives of human experience, and therefore do not always tell of beautiful things”. Several poems follow the exploits of Qujaavaarssuk, a heroic figure and general strong man, who is reduced to singing a dirge at the troubled fishing grounds and is advised by “a man who is not his father” (a break in traditional forms of transmission here?) that the one thing to be relied upon is that “hunger will come of its own accord”. ‘Hospitality’ in such circumstances may consist of feeding guests “the kidneys of a black seal / as the ice harden[s]”. Qujaavaarssuk’s immediate difficulty is the presence of too much ice (a deliberately ironic comment on the shrinking ice caps of our day): he sees the shadows of seals moving beneath it and sets out “to the ice edge to follow them” but what Campbell is interested in (these are contemporary poems, not slavish myth-reproductions) is the failure of the hunter. In ‘Danger of Snow Blindness’, Qujaavaarssuk returns for the first time “his sled empty, his kamiks [boots] clean”. ‘The Last Seal’ opens:

There was nothing left to feed the dogs.

Qujaavaarssuk shot them, one by one

and fed them to each other.

To the contemporary reader, what lies largely unspoken beneath these chilly, often curt, unsentimental chips off a mythic block is, of course, our own awareness the adverse effects of climate change. ‘Ruin Island’ becomes apocalyptic in tone so that the words spoken by a hunter that conclude the sequence, words spoken by Jorsias Ammonsen in a real interview conducted in 2006, are presented as the reply of a hunter “who can no longer hear the question”. In this way, Campbell tragically ironises Ammonsen’s proud, nostalgic, heroic, perhaps hopeless comments:

When we were young

no place seemed too far away for hunting.

We travelled a long way,

too far to come back the same day.

We slept in stone caves

and were cold in winter.

Nothing is too harsh

when you are accustomed to it. 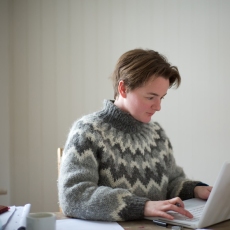 Campbell tries to remain true to the plain directness and dignity of such a voice in most of these poems. The figure of the poet seldom intrudes. When it does she is trying to learn the “soft uvulars” of a new language which seem like “dark flocks of sound I’ll never net, or say”. Difficulties of expression in one language are compounded by problems of communicating across distance to her own homeland: “Since I can’t post a letter this far north, / I’m sending you an Arctic snowstorm”. ‘The Night Hunter’ is typical in its use of a simple lexis – snow, door, harbour, boat, blood, sled, knife – and a repeating form of verse as if the polar climate has sheared away more baroque elaborations of language and form. At first this feels cramping, but as Campbell persists and insists this really is what she intends, the simplicity seems more likely to put us in touch with the elements, the elemental, the bottom line of harsh Arctic existence.

With figures like the hunter Qujaavaarssuk so prominent you might anticipate a macho sort of world but the harsh conditions seem to teach an underlying humility (even to men) and Campbell has a number of female narrators who are clearly no push over. In ‘The Seal People’ a seal hunter’s wife watches the vindictive spirits of killed seals approach by boat and though threatened by them her voice does not falter through three steady quatrains, the verse’s repetitions here expressive of her firm courage. ‘The Hunter’s Wife Becomes the Sun’ is a major poem (its form is a sestina with its obsessive recurrences). Here, a hunter’s wife gives him a tinny Christian memento for protection. The hunter is more concerned with the reality of death and an apocalyptic sense of the world’s end (Campbell’s chosen rhyme words are tin, angel, window, box, candle, darkness). But his wife insists on the need for “light”, transforming herself into a “vast white wake / of stars” which might be considered angels, though the man himself finds it hard to shrug off his pessimism: “At the world’s last window, I light another candle”. The shamanic implications of their exchange are more explicitly played out in three translations of crude Greenlandic Qavak songs, originally collected in the 1950s. They are spoken by a “terrible mother” a “female shaman” and an omniscient “wicked woman”, the latter advising the only way to tackle an enemy is to bite off and employ her clitoris as an arrowhead. Neither the blunt obscenity or implied moral judgement can hide the suggestion that this remote culture clearly understands the importance of the female in ultimate survival.

One of the impressive things about Disko Bay is that it is eco-poetry without shed loads of landscape description. Those vindictive seal spirits carry a powerful ecological message in their “round, black eyes” – less for the Greenland hunter and his wife (whose place and role within a traditional, sustainable Arctic ecosystem is be unlikely to unbalance things) but to us with our petrol engines, plastics and carbon complacencies. Another success of the book is its use of myths redolent of Nordic and North American materials without distracting echoes of Ted Hughes’ trickster figure Crow. In ‘Fragment’ a severed raven’s wing in the snow is enough to imply the global problem: “Never to breed, never to scavenge / on scarlet seal hearts by the ice edge”. It is brave of Campbell to delay the more eco-explicit poems to later sections of the book. Part three sets off from the premonition that “the future is full of riddles” and ‘Conversations’ conveys both the mystery and the certainty of climate change: “I don’t think it is one thing / I think it is a combination of things / a combination of everything”. The riddle-subjects appropriately include a tsunami and an iceberg but not the dirty complexities of the ever-hungry, seldom-satisfying capitalism rejected by the boy who constructs a kayak not to be sold but for his own setting out in this fine, unusual book’s concluding poem.