Last week I travelled down to the Holburne Museum in Bath to take a look at their Brueghel dynasty exhibition – this is where I am running a poetry workshop this coming weekend (25th Feb – it’s waiting list only now I believe). So after last week’s blog post about the varieties of ekphrastic poetry, my mind is still on the same topic. Unsurprisingly I have been looking at William Carlos Williams’ late ekphrastic poems in Pictures from Brueghel (1962). I think the reasons why Williams was so drawn to these images 50 years ago remain the reasons why Brueghel’s star continues to rise in popularity (not just among ekphrastically-inclined writers) in our century.

We like Pieter Brueghel the Elder’s work because it gives an impression of conveying a plain, unvarnished truth and this was done by self-consciously reacting against Romanist and more conventional, stylised Renaissance models. This gives many of the images a democratic or at least a demotic feel (something Melvyn Bragg and his guests pursued in the In Our Time edition on Brueghel’s painting ‘The Fight Between Carnival and Lent’). We also respond to Brueghel’s gentle caricaturing of human figures which seems to be done at least as much out of amused sympathy as satire. We are intrigued as well by Brueghel’s tendency to literal eccentricity, to displace the expected centre of his canvas, most notably in Biblical subjects where the Nativity or the journey to the Cross is subsumed – hard to spot – in a larger, village scene. In other images, there seems almost to be no clear centre of focus (in pictures on children’s games or Netherlandish proverbs, for example). For Williams, a 20th century poet interested in breaking with tradition (linguistically and formally), on fully recording the modern world as it is, and with a clear democratic (American) focus, Brueghel’s work makes an obvious rhyme.

Most of Williams’ poems about Brueghel’s pictures simply describe what is to be seen. There is a fidelity to the fidelity of what Brueghel does. The closing lines of ‘Children’s Games’ praises the way “Brueghel saw it all / and with his grim // humor faithfully / recorded / it”. ‘The Wedding Dance in the Open Air’ describes plainly the “riotously gay rabble of / peasants”, the poem intent mostly on conveying the sheer energy and vitality of the scene, climaxing in the “Oya!” cry which comes as much from the mouths of the peasants as from the admiring poet. What adds interest to this poem is the opening statement that such a fizzing and spilling of energy is “Disciplined by the artist / to go round / & round”. 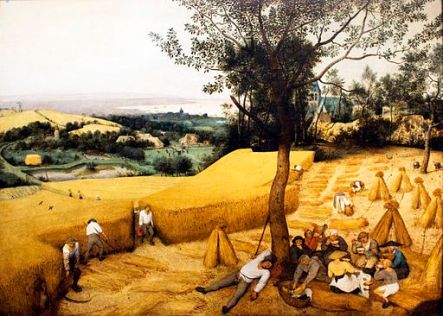 ‘The Corn Harvest’ is likewise largely descriptive of the particular canvas though the role of the artist as ‘organiser’ is noted at the outset. The poem ‘Peasant Wedding’ repeats this descriptive method, varied only by the poet’s opening imperative address to one of the figures: “Pour the wine bridegroom”. The tension in this poem is less between artist and his boisterous subjects but between the boisterous wedding guests and the bride who sits “awkwardly silent”. Williams’ frequent thoughts about the nature of the artist surface most clearly in ‘Self-Portrait’ (a Williams’ mistake – in fact a painting not by or of Brueghel at all).  Starting again from plain description, the poem comes to focus on the artist’s eyes (“he must have / driven them hard”) and the poem deduces/speculates on the artistic commitment this implies: “no time for any- / thing but his painting”. 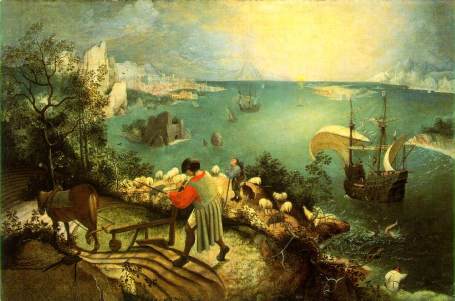 In ‘Landscape with the Fall of Icarus’, Williams looks at the same painting that Auden did some 20 years earlier. Williams’ take is very much like Auden’s and both are finely attuned to Brueghel’s image which characteristically displaces the centre of interest (the falling boy’s body). For Williams, the event occurs “unsignificantly” and the splash goes “quite unnoticed” or as W H Auden put it more memorably as the Second World War got under way: “everything turns away / Quite leisurely from the disaster”. 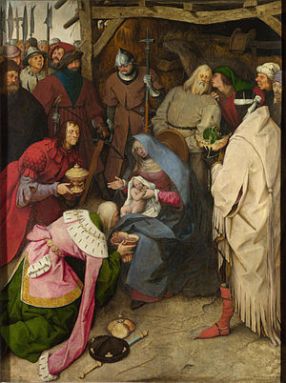 ‘The Hunters in the Snow’ mixes plain description with an interrogation of the artist’s choices as “organiser” of the image, his placing of objects to left or right, background or foreground. Williams again expresses his admiration for Brueghel’s concern “with it all”, for the older artist’s inclusive, comprehensive engagement with the world; this from the poet who wrote of wheelbarrows and cold plums. This insistence on art’s encompassing what is there (more than what we’d like to be there) emerges again in ‘The Adoration of the Kings’ (Williams also wrote about this image in Paterson (1958)). Here. Williams uses a bit of art history to point out Brueghel’s divergence from “the Italian masters”. Brueghel’s mind is said to be “alert” and “dissatisfied with / what it is asked to”. Rather than a slavish adherence to tradition, Brueghel is a “chronicler”, in particular in the eccentric portrayal of Joseph, chatting distractedly in the background, and Mary, eyes downcast, self-deprecating, almost hidden from view.

The best of these poems is ‘The Parable of the Blind’. Using his usual devices of description of the image and comments on the artist’s judgment (its colours and diagonal arrangement of figures), the punch of the poem arises from an imaginative reading into the image. Some of the blind men’s faces are raised skywards, Williams says ironically, “as towards the light”, yet in reality they follow one another “stick in / hand triumphant to disaster”. It’s a “horrible but superb” picture” says the poem and perhaps Williams’ sense of the horror lies in the fact Brueghel has portrayed this moment (one of many that seem to have proverbial roots) with a fidelity that, on this occasion, accentuates the grimness far more than any possible humour: it’s an unusually cruel image.