Skip to content
HomeWhat Have I Mostly Been Reading?Recent Reading (up-dated)

Click here for an archive of previous postings on Recent Reading.

My apologies that this thread has fallen into dis-use – blame too many books and a lack of time.

In My Life as a Painter, Matthew Sweeney’s new poems’ odd-ball imaginative flights – full of surprises and surreal excursions – often read to me like protective charms against suffering and injustice. Such part-comic redemptions or self-renewals are particularly poignant given Sweeney’s recent announcement that he is suffering from motor neurone disease.

I picked up a curious ‘Masters of Wisdom’ anthology that mixes brief extracts of Henry David Thoreau’s prose and poetry and I consequently marvelled at how contemporary the former sound compared to the fusty, dreadful, datedness of the poems. But hearing him (in 1854) discuss growing rows of beans and comparing himself to Antaeus is a fine reminder that the best poems must keep their feet firmly in touch with the ground.

I also read two ekphrastic books (for a forthcoming review in Agenda). Much of David Pollard’s Three Artists – Parmigianino, Caravaggio, Rembrandt (Lapwing Publications) focuses on the mirroring and self-reflection of self-portraits with undoubted ambition and seriousness of intent.

And Seamus Cashman’s The Sistine Gaze (Salmon Poetry) is even more ambitious in taking on Michelangelo. The book works towards a modern – or perhaps Blakean – godless vision of human life where “heaven is adoration of knowledge, and god is who we know ourselves to be”. 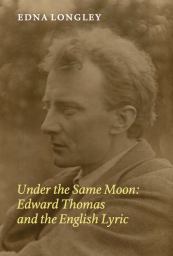 Edna Longley’s critical book, Under the Same Moon: Edward Thomas and the English Lyric from Enitharmon is a marvellously dense and insightful discussion of Thomas’ work. Longley is really arguing a case against Eliotesque ‘modernist fragmentation’ and in favour of what Thomas called the “myriad-minded lyric” form – from Yeats and Hardy. The book covers Thomas and Romanticism, War poetry, Frost and Larkin.

Penelope Fitzgerald’s 1984 Charlotte Mew and her Friends fleshed out what little I knew about this poet of the early 20th century – “the best living woman poet” according to Thomas Hardy. Fitzgerald also includes the most vivid account of Harold Munro’s Poetry Bookshop in Bloomsbury that I have ever read. Worth buying for that alone. I’d forgotten how Mew’s story ended and it’s an appalling shock to the uninformed.

I found Sasha Dugdale’s Joy (Carcanet) a very mixed read. It contains her Forward winning eponymous ‘poem’ which is really a prose monologue by Catherine Blake, after her husband’s death. This piece is ambitious and strange and touching though I’d not agree with the Forward judges that it is a “visionary” piece of writing (just because it’s about William Blake?). Better is ‘Canoe’ a long poem about a group of people leaving a country. Dugdale’s poems often focus on tensions between “moving and belonging” but I’m less convinced by her ballad forms.

Linda Black’s Slant from Shearsman is aptly named. “Think – round the edges / over the top (of spectacles?) right to left // laterally        Diagonalise”. The poems’ impact is often surreal in jumps and juxtapositions, though the material is often domestic or from an English garden. It feels right that Black takes from Virginia Woolf’s diaries in one poem: “My feeling is half moonshine. I am trying to tell / whatever self it is cast shade upon me”. There is ‘difficulty’ here and, over 90 pages, ‘essays’ in the style which don’t come off – but when it does, Black’s voice is unique and movingly follows the mind in its more neutral gears. 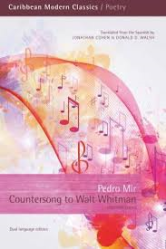 Pedro Mir’s Countersong to Walt Whitman was kindly sent me by Peepal Tree Press. From the Dominican Republic, Mir is a neglected contemporary of Neruda and Nicolas Guillen. This book contains work from the 1940s-1970s, all brilliantly translated by Donald D Walsh and Jonathan Cohen. Amidst a lot of contemporary British poetry I’ve been reading recently, Mir is both effortless and colossal. I hope to blog on him soon.

Two Selected Goethes – the 2005 Penguin Classics translated by David Luke and a Calder edition from 1983 translated by various hands (especially Christopher Middleton). Impossible to sum up such a prodigious and protean poet but it struck me as remarkable that here was a contemporary of Wordsworth with such playfulness and openness to sensual experience. 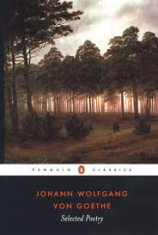 Andrew McNeillie’s seventh collection is published by Guillemot Press and is full of lapidary lines of verse across which a plain-tongued speaking voice is set flowing. The beauty of islands, age, and our mercenary age are themes and despite protestations of poetry’s neglect and lack of influence, there’s no doubting the poet’s faith in the “sea still knocking at his door”.

Caroline Bird’s book opens with ‘A Surreal Joke’ which concludes, “write the simple truth? I said, why?”. In its place she gives us lively often funny versions of surreal-lite, of incongruity and non-sequitur which, in the end, I found rather tiresome with too few metrical pleasures.

The much-garlanded Sinead Morrissey’s work is always interesting though she’s seldom in danger of brevity. In both On Balance and Parallax, poems about parenthood are mixed with others more dependent on interesting, often arcane, trails of research. She’s also an experimenter with form and rhyme and, when at their best, her lengthy pieces often create the impression of a significant journey achieved. 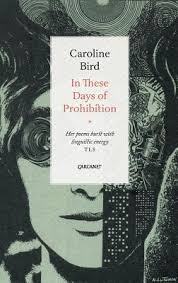 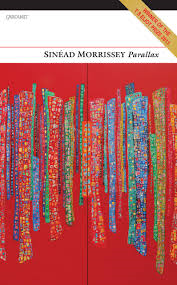 Owen Barfield’s Poetic Diction, first published in 1928, sounds dusty and old fashioned but is really far more philosophical and explores the ‘mysterious area in poetry between word and meaning’. This new edition from Wesleyan comes with Howard Nemerov’s praise of Barfield’s book as “not only a secret book, but nearly a sacred one”.

My reading of The Essential Plotinus probably arose from my reading of Barfield’s book. Barfield’s idea of human consciousness undergoing an evolution implies a stage in which we experienced an “original participation” or sense of oneness with the world. Plotinus difficult writing is one of the route sources of such ideas. Give me another lifetime to absorb it . . .

Giant is Richard Georges’ new collection from Platypus Press and is interesting despite a ludicrously purple blurb from Ishion Hutchinson. My review of his earlier book enjoyed his images of Caribbean past conveyed through images of the sea, their symbolic burden deepened and broadened to something nigh-existential without losing any of its historical or political power.

Nic Stringer’s debut collection from Guillemot Press, A Day That You Happen to Know, isa lovely object with images by Lucy Kerr accompanying all the poems. Stringer writes with an enviable freedom of form about witches, icebergs, Samson and Delilah, Ned Kelly and electricity pylons.

Tara Bergin’s The Tragic Death of Eleanor Marx plays with facts from Eleanor Marx’s life – her betrayal by her husband, her suicide (imitating Madame Bovary’s) and her translation of Flaubert’s novel. Elsewhere, patriarchy and the position of women are conveyed in pronouns – whether he or she is subject or object, speaker or spoken to. I didn’t find Bergin’s language or use of form greatly interesting.

With the marking of the centenary of the Russian Revolution, I took down from my shelves Anna of All the Russias, Elaine Feinstein’s biography of Anna Akhmatova. All the facts are there without the life of this extraordinary woman ever quite coming alive, though the searching out and cooking of a single potato for a visitor during the siege of Leningrad stays in my mind.

Somewhere second hand, I picked up Peter Burke’s Montaigne in OUP’s Past Master series. He does a good job of assessing this most uncategorizable of writers who characteristically invented the idea of the essay, or essais – not to declare the truth but to look for it. He was “weary of religion / and the fickle court”, as Adam Thorpe put it in his 1990 poem ‘Meeting Montaigne’, and would always ask ‘Que sais-je?’ 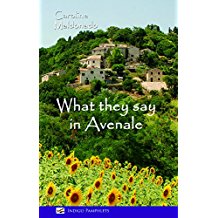 In October I read in London with Caroline Maldonado and came away with her collection of poems called What They Say in Avenale (Indigo Dreams). She lives partly in Le Marche region of Italy and these poems record the people, their work, the weather and wild life of that beautiful place.

Few recent books are as economical and delicately allusive as Matthew Stewart’s debut, The Knives of Villalejo, from Eyewear Publishing. His two preoccupations are family (a West Sussex childhood, ageing parents, a child) and life as a resident in Spain. The former is about the loss of communication; the latter more celebratory (like Maldonado) with the rituals of food and wine featuring prominently.

The Hippocrates Book of the Heart is a unique anthology of poems from the likes of Alvi, Shuttle, Satyamurti, O’Brien, Harsent, Greening and Gross as well as a section of prose writing by medical professionals. I bought a copy to give to my daughter whose in her third year studying medicine! 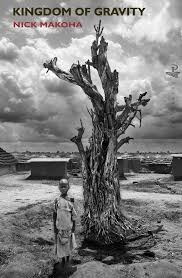 I’d hoped that Nick Makoha’s Kingdom of Gravity would win the Forward First collection prize in September. I thought his ability to write about contemporary events a rare talent. Makoha will be important for UK poetry for some while.

William Griffin’s hyper-episodic biography of C.S. Lewis, The Authentic Voice has a novel-like attention to memorable detail. Simultaneously troubling and interesting, Lewis argued for Christians as a new step in evolution because they have abandoned their own personalities and allowed God to inhabit them. I blogged in more detail on Lewis here. 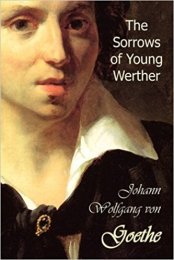 Shamefully, having referred to the text in teaching for years, I eventually got round to reading Goethe’s The Sorrows of Young Werther. It kept reminding me of Shelley’s Frankenstein – though of course the influence is the other way. Shame about the gobbets of Ossian later on.

Am teaching the always mysteriously wonderful poems of Robert Frost over the coming months and consequently blogging about him on occasions. For example . . .

I found Eric Langley’s Forward-listed Raking Light a challenge, not always of the right sort and it yielded up some thoughts about poems and explanatory notes.