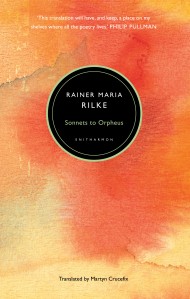 Published by Enitharmon Press in 2012:  for more information click here.

I was very glad to read Martyn Crucefix’s translation of these extraordinary poems. Of course, all poetry resists translation, and one poem may have many different versions in another language; what I look for first is clarity, and this version supplies that generously. With the presence of the German text and Crucefix’s helpful notes, the English-speaking reader with little or no German will find in this version a welcoming entrance to the path that leads eventually to a full understanding – if a full understanding of this mysterious poetry is ever possible. Crucefix’s translation will have, and keep, a place on my shelves where all the poetry lives.  Philip Pullman

There have been many translations of Rilke’s rapidly composed Sonnets to Orpheus of 1922, and every time the voice of the original has modified, deepened, and grown. The Sonnets are, as always with Rilke, complex, sometimes lucid, at other times veiled but always passionate. They are some of the greatest philosophical poems of the century. Martyn Crucefix’s impressive previous translations of the Duino Elegies have accustomed us to a way of hearing Rilke, but these are, if anything, more beautiful and natural versions, the form falling lightly on the ear, the thought tantalisingly clear in these bold explorations at the edge of sensibility.  George Szirtes

Blurb:  In one astounding month in 1922, the fifty-five Sonnets to Orpheus were “dictated” Rilke says in “the same breath” with which he completed his Duino Elegies. These poems began as a memorial to the dancer Vera Ouckama Knoop, yet they are amongst the most joyful and light-footed poems Rilke ever wrote. “Praising, that’s it!” he declares and goes on to celebrate and enact a renovation of human perception, the healing of the rift between self and other, between life and death that is epitomised in the singing of Orpheus.

O where are we? Always, ever freer

we flutter in mid-air. Marshal every crier,

you singing god, so their awakening is a roar

like a torrent bearing the head and the lyre.

Following his acclaimed translations of the Elegies, Martyn Crucefix’s eagerly anticipated The Sonnets to Orpheus brilliantly catches both the dazzling speed and lyrical grace of Rilke’s masterpiece and his concise commentaries, informative Introduction and parallel German text makes this the ideal edition for readers new to Rilke’s extraordinary work as well as devotees ready to welcome these vigorous, powerful new translations.

And all things hushed. Yet even under cover

From their stillness, creatures of lair and nest

pushing forward through the clear-lit forest

so quietly and this – not out of cunning,

not silenced by fear – but coming

rather to listen. Bellow, shriek and roaring

shrank in their hearts. And where there stood

no more than a shed to receive them,

a shelter in response to their darkest need

with its entrance, its door-frame shaken,

there you built them this Temple of Hearing.

Erect no memorial stone. But let the rose

come into bloom each year on his behalf.

That is Orpheus – each metamorphosis

to this, to that. We need not be troubled with

other names. Once and for all, Orpheus

is where there is singing. He comes and goes.

Is it not enough that on such occasions

for a few days he outlasts the bowl of roses?

O yet he must vanish so you comprehend!

And even though he fears this disappearing.

In this, his word out-strips our being –

Strings of the lyre do not constrict his hands.

And he obeys just as he out-plays them.