Skip to content
HomeHow to write about ‘sacred objects’

Recently, I spent a weekend at the house I now know as ‘Wiltshire’. It’s where I grew up through the late 1950s, 1960s and early 1970s. I’ve been living elsewhere for so many years now and ‘home’ is in north London so the old county name suffices in most conversations to communicate what I mean: ‘I’m going back to stay in the house of my childhood’.

My parents still live there, both into their 90s, but managing with a little help to live independently. (See my earlier blog on memory and nostalgia here) It’s what has happened there over the years that makes me want to label it ‘sacred’ ground. From the Latin ‘sacer’ meaning holy, the word originally meant connected with God, sanctioned by religion, a valorisation that was religious rather than secular, a value determined from outside the sphere of the self and in the Latin words ‘sacerdos’ and ‘sanctum’ implying something cut off from the mundane, something distant.

But even in the continuing absence of any religious sense in my life, certainly any external religious authority that might determine this or that object or action as ‘sacred’ I still want to use the word – even as I confess this is a value determined solely by my own view of the world. But I do think that my sense of the ‘sacred’ is coupled with the passage of time. I don’t think anything can be instantly ‘sacred’. It has to be re-examined, worn, re-visited. 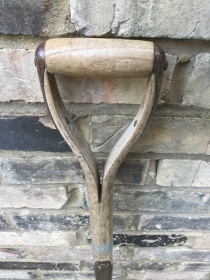 My Dad is well into that phase of old age when he wants to give everything away. There has never been very much to give, of course, and recently he has taken to wandering round the car-empty garage, picking out old tools and rather hopelessly asking myself and my two brothers whether we have any need of them, because he doesn’t any longer. The answer is really ‘no’ but occasionally I relent not to appear too ungrateful. However, on my last visit, I’d broken my flimsy Homebase-bought garden fork a couple of weeks earlier, trying to lever out a slab of paving. So when Dad offered me his old fork I took it.

It’s unpromising material for sacred eminence but because his hands have held it for over 60 years, wearing the shaft smooth, because his muscles and the instep of his right foot have pressed and shoved and pulled at it over that length of time it makes the grade. Sacredness is sort of metonymic here then. It stands for him. This is something I respond to in Seamus Heaney’s poems, in particular the first part of ‘Mossbawn’, dedicated to his aunt, Mary Heaney. (Read the full poem here)

Reading it over again I’m struck by its focus on particular ‘sacred’ objects – the “helmeted pump”, the “slung bucket”, the warm wall, the bakeboard, the stove projecting its “plaque” of heat (that perfect choice of word suggestive of decorative and commemorative without becoming over-blown or monumental). His aunt’s actions and her domestic implements are likewise noted and linguistically nailed (the poet’s precision echoes his aunt’s):

Now she dusts the board
with a goose’s wing,
now sits, broad-lapped,
with whitened nails

and measling shins:
here is a space
again, the scone rising
to the tick of two clocks.

The final quatrain reverses the more usual order of figurative language to begin with the abstraction which is said to be “like” the actual object, love embedded in its everyday setting as much as the meal scoop is submerged, absorbed, integral to the meal bin, sustaining domestic life:

And here is love
like a tinsmith’s scoop
sunk past its gleam
in the meal-bin.

Heaney performs this magic in the present tense (a fact he rather flaunts with that “Now [. . .] now”) despite it being evidently a long-harboured, cherished memory. What might have been lost to the ravages of time is brought back into the present. I like to note that the word ‘holy’ dates back to the 11th century and the Old English word ‘hālig’, an adjective derived from hāl meaning “whole”, used to mean “uninjured, sound, healthy, entire, complete”. Lacking the authority of an external God, what is sunk deep into our past lives can be simultaneously brought back into the present, whole and holy, and this is what we might designate as ‘sacred’.

One object from ‘Wiltshire’ I once managed to write about is the garden gate. You can just glimpse it in the background of the picture above. The adult is my own aunt (not really an aunt but my mother’s best friend). I’m on the left of her here. The poem originated in workshop exercises directed by Myra Schneider (her website is here) a few years ago now. With thanks to her, what follows is my own formulation of her process.

was inch-tubular for economy’s sake,

a post-war issue for a self-built house –

Hammerite black now, but once white,

a rough square between cement gate-posts.

A big-thumbed latch on the left,

beside it, a schematic sun-rise of tubing,

beneath, the squared-off wire grid

I’d work my toes into, find the springy dip

of my weight on the straining hinges,

Then a jarring crash and decrescendo:

of my brother after football on the grass.

bent to secure it with as much care as

she shook slippy fried eggs onto my plate.

his sluggish pirouette and up the path,

coming home with an empty Thermos.

And then me, arms shaking at the ridges

of concrete under my trike, Dad stooping

to frame the cream gate, the hedge beyond,

the telegraph wires converging on clouds,

wires dividing the bright air at my every

effort to remember until it appears

all that muddle of love has so long gone

unremarked between us, there is no need

to hearken to it, though a bad day shows

every possible latch broken while another

is effortless, finds the point of purchase

into the give and spring and swerve and space.

4 thoughts on “How to write about ‘sacred objects’”